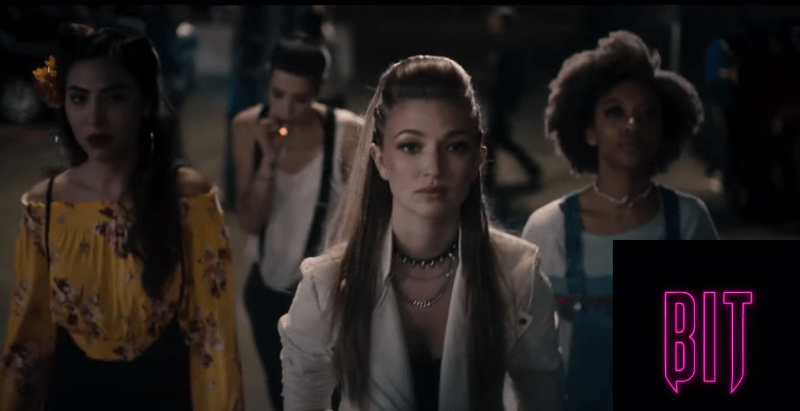 Bit is a breath of fresh air in independent horror. Reading the summary, I wasn’t sure what to expect from this inclusive film — and I even read a few reviews saying the film was kind of sexist — but, honestly, I truly enjoyed this unique film packed with interesting, relatable characters and a cool, hypnotic vibe.

A quartet of sexy Los Angeles female vamps run by leggy, model-gorgeous Duke rarely invites in new meat, but when she meets Oregon-bred Laurel in a bar she is immediately drawn to her. Laurel just graduated high school and headed to LA to hang out with her older brother, an aspiring actor, for the summer while she decides what her next step is. She probably didn’t plan on being sucked into a feminist vampire cult, but hey, these things happen.

What’s most appealing about the vampires in this movie is that they’re select and very careful about who they transform and even about who they eat. One of the most quoteworthy and notable lines in this film comes when Duke tells Laurel the girls never turn men because, “Men can’t handle power. They have it already and look what they’ve done with it.” Point taken!

Duke dreams of a society where women reclaim their power by becoming vampires, but for now, she keeps the group small and tight-knit in order to exert some sort of control over the kills that occur. The girls are queer vigilantes, taking down men that have wronged women or society in some way. However, sometimes they feed indiscriminately, or “80/20,” as Duke says offhandedly.

Laurel is given a choice whether or not she wants to go vamp, and the disillusioned teen can’t really imagine why she shouldn’t. What could be more exciting than the glamour that comes with immortality? And, like Duke says, maybe men should be the ones scared to jog at night – a phrase which really resonated with me and probably most women watching this film.

Imagine if men were the ones walking to their cars with pepper spray poised, looking over their shoulders in dark parking lots, always imagining they will get jumped! What would the world be like?

The movie doesn’t hold much back as far as the message it’s trying to get across, and I think it does so in a fairly bold way. However, it’s not offensive. Let’s face it, men do hold the power, they always have and always will, and there’s something simply joyful in seeing women grab the wheel, even if it means lives are lost (hey, it’s fiction!)

I think all of us have daydreamed of being able to turn the tables on the guy who raped us, the man who made snide comments when we got the job and they didn’t, the sleazebag who catcalled us at a bar, pedophiles and murderers who get off on hurting females.

But Bit doesn’t bring you down. It allows you to rejoice in the power these girls have, and even if, like most people with power, it doesn’t always end the way you want it to, it’s dizzying to be able to experience that type of power and control in a world where women are still — in the 2000s! —forced to feel like the lesser gender, even when so much progress has been made.

The gore level is fairly light, but this movie doesn’t really need blood and guts. It’s sharp, fun, unique, and never skips a beat. I loved every second, and even if the ending wasn’t exactly what I imagined it would be, it was true to the characters and had a satisfying feel.

The takeaway from Bit? Not all men are bad. Not all women hate men. But the idea that women could have the sheer power and control over their lives and their safety that men have, even if they have to be bloodthirsty killers to do so? Kind of appealing, I won’t lie.