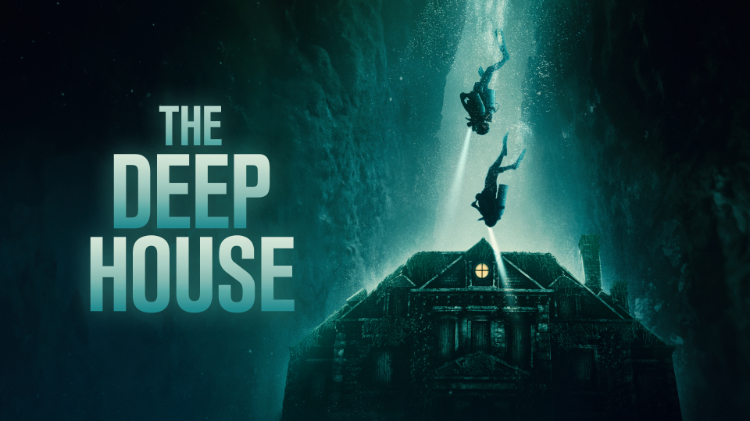 I remember hearing about The Deep House awhile back and thinking it was a unique premise. However, when the film finally came out, initial reviews were mixed. Some viewers thought it was great, others thought the subpar acting weighed down the film.

Well, I had to form my own opinion, and as a person terrified of the ocean (I saw Jaws at a young age, in my defense) I couldn’t wait to watch it. After all, what can you do to the tired haunted house subgenre besides toss it all in the ocean?

The Deep House is a French film that brings you along for the ride with Tina (Camille Rowe) and Ben (James Jagger), a young couple who use their YouTube channel to explore hidden, abandoned, and haunted locations.

The duo discovers a story about a city submerged under water many years ago, and though much of the village was lost, one house is rumored to be intact yards below the quiet surface of the murky and dark waters.

The pair set out to explore and film the house after they get a local to lead them to the right spot.

Right away, the cinematography is impressive. You absolutely get the sense that you’re underwater (watch with the lights off!) and it feels a little claustrophobic. It’s amazing! I wish I had seen it in a theater for this reason alone. I was reminded of the video footage I’ve seen of the Titanic rotting on the ocean floor, which is still very haunting and disturbing to me.

As the young couple explores the spooky, crazily well-preserved house sitting at the bottom, things get creepy quickly. They find out what really went down in this house and why it’s haunted, and things escalate in a hurry from pleasant, relaxed exploration to a frantic desire to GTFO of the house and as far away as possible.

I really liked the storyline of what transpired in the house (yikes!!) and what Tina and Ben saw there (double yikes – those images won’t ever leave my brain), and I found it engaging, interesting, and hella frightening! There were definitely some moments where I was nervous and wished Tina and Ben were back on dry land.

As they begin to run out of oxygen and time to make their escape from the sinister underwater lair, the last quarter of the movie speeds up in intensity to reach the climax of the film. Some reviews I saw mentioned the ending and thought it “disappointing,” but I thought The Deep House‘s ending was logical and worked well for the scope and vibe of the film.

Should You Dive into The Deep House?

The Deep House may not hinge on any completely crazy, out-of-the-box concepts as a whole, but the innovative underwater camera shots and the creepiness of the house make this a beautiful movie to watch. It’s unique enough to keep you interested, and for me, the scenery and story were enough to make up for any plot holes or acting choices that I didn’t agree with.

With beautiful imagery, an unexpected ending, somewhat old-fashioned scares, and a fast-paced, engaging story, The Deep House may not be the best movie of the year, but it gets points from me for effort, creativity, and just doing something different in a horror landscape that’s drowning in reboots, ‘requels,’ prequels, and remakes.

Beautifully directed by Alexandre Bustillo and Julien Maury, The Deep House is a treat for the eyes.

I’d recommend The Deep House for horror fans who’re desperate for something different. And, if you’re completely freaked out by the thought of what’s in the ocean too, prepare for scares. I’ve never had a desire to go diving and, after seeing this film, I’d never explore the ocean floor! But I’d gladly watch The Deep House again — on dry land, obviously.