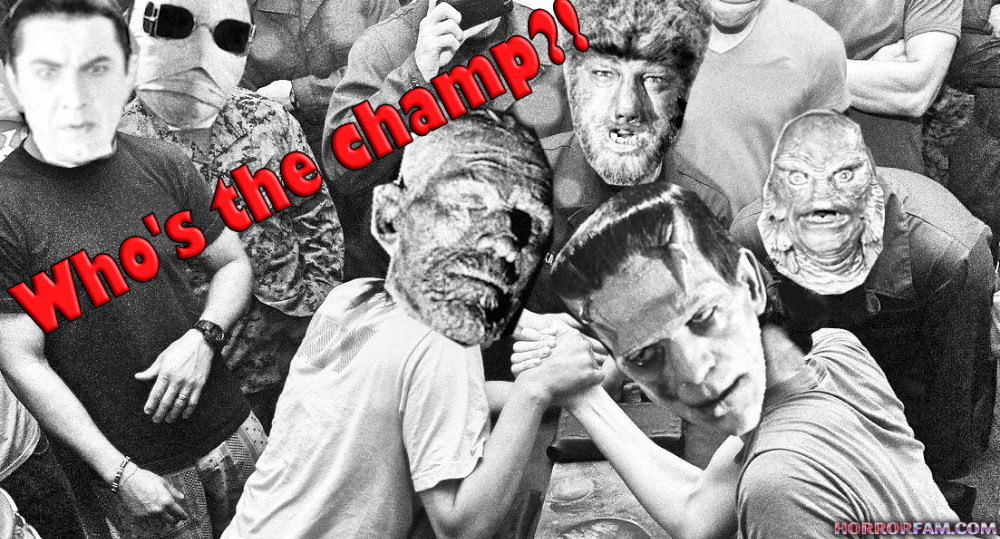 As horror fans, we all know — or at least know of — the classic Universal monsters. Their legacy began in the silent era with The Phantom of the Opera (1925) and spanned decades, spawning numerous sequels and spin-offs.

We even have new movies coming out featuring these classic characters! Even in the midst of the pandemic, 2020’s revamp of The Invisible Man was met with excitement and overall favorable reviews. And at least 10 additional movies taking place in the Universal Monsters universe have already been announced.

We LOVE these iconic monsters! But which ones to we love the MOST?!

Hard to say! You’re not around to ask right now. It’s just me sitting here. So… I’m just going to tell you the ones I love the most. And, if you show up on this post and want to chime in, please feel free! I’d love to read how YOU rank these dudes in the comments’ section!

For now, you’re stuck with MY opinion. And I’ll be ranking the “core” six Universal Monsters — Dracula, Frankenstein, the Mummy, the Invisible Man, the Wolf Man, and the Creature from the Black Lagoon — in the order of their awesomeness:

Mummies always seem like a good idea when it comes to horror movie monsters on paper, but they’re extremely difficult to pull off on film. I love The Mummy (1999), I dig the portrayal of the mummy in The Monster Squad, and — heck! — I was even a fan of the late 1990’s cartoon show Mummies Alive!

However, the “original” mummy — the iconic/classic mummy, from The Mummy (1932) — is dead last on my hierarchy of the core Universal Monsters.

He’s got a fabulous look! As a still photograph, Boris Karloff’s costume is top-notch! But, as a horror movie monster… Imhotep the Mummy severely lacking. He’s weak, he’s painfully slow-moving, and he’s easily defeated. He’s never really a threat! Dude doesn’t even have his eyes open most of the time he’s slowly shufflin’ around! You could just knock him over or, you know, walk away from him.

The Mummy gained additional powers and became more of a true “horror” in later renditions. However, when ranking these Universal Monsters by their first/classic appearances, I put the Mummy at Number Six out of six.

If you listened to Episode 10 of the HorrorFam.com Podcast, you already know some of my thoughts on Dracula. My husband, Frank Spear, and I discussed our favorite Dracula portrayals.

This is where the “ranking” gets tough. It’s easy to bag on the Mummy (sorry, Imhotep!), but the other “core” Monsters are also so inherently lovable due to my ingrained nostalgia for them. I feel badly putting any in the lower ranks…

However, as much love/respect I have for Bela Lugosi cast aside, the classic version of Dracula is just not the “monster” champion.

Vampires, to me, should have an equal balance of suave and menace. And while the OG Drac is suave as all-get-out, he’s not menacing at all. So… Fifth Place!

4. The Creature from the Black Lagoon

I have a soft spot for the Creature from the Black Lagoon, mostly because I was acquainted with Ben Chapman (the man who played the Creature whenever he was on land) and am friends with one of his sons. And that costume is crazy rad!! I love the Creature’s design.

But, let’s face it, the Creature is basically just an animal. He was just chillin’ in the Black Lagoon, minding his own business, when he was suddenly captured and thrust into an aquarium exhibit.

And he was a well-behaved exhibit! Creature was a good boy! He did what most aquarium-based marine animals do: He swam around, ate his meals, and occasionally glanced out at the curious crowd of onlookers. Until, of course, they started zapping him with underwater cattle prods.

So, I’m putting the Creature in Fourth. He’s one of my favorite Universal Monsters (if I was basing my ranking on looks alone, he’d be Number One!), but I’m ranking him lower overall because he’s not really a monster. He a gud boi.

I truly questioned whether to put Frankenstein’s monster in fourth or third place. It was a tough call! Like the Creature, I don’t really see The Monster as a true monster. He, too, is a victim — at least in his first/classic appearance.

I ranked him a little higher on the list because I enjoy the complexity of his character. But I actually have another reason for putting “Frankenstein” above the Creature…

There’s something I’ve noticed about the old Universal Monster films. I’m sure others have noticed it as well! The titles of the movies are the names of the monsters. So, using that logic, in the case of Frankenstein (1931), the TRUE monster of the film is really:

Is Doctor Frankenstein a monster? Yeah, I’d say so! He’s unhinged, he’s messin’ around with dead bodies, he’s a VERY BAD parent to his poor creation… He’s a total jerk to a monstrous degree!

Is he still in my Top Three faves? Absolutely.

I think, on some degree, everyone can relate to the Invisible Man. He made a mistake. He was like, “I know this is bad, but I’d like to fix it. Please give me some space to figure this out?” And did people give him space? NO! Of course they didn’t!!

Does that make the Invisible Man a “victim” as well — like Frankenstein’s Monster or the Creature? Nah. He’s a monster. Because, let’s face it, having people bug ya is just an annoying fact of life — it’s not a valid excuse to go on a murder spree!

I also love that the Invisible Man, as a monster, is quite menacing. Invisibility powers in the hands of an everyday human are usually kinda lame (used for pranks, staring at undressing women, etc.); however, the Invisible Man is extremely intelligent, has a wicked sense of humor, and was able to craftily kill hundreds of people before he was caught! That’s pretty scary!

Also, as my dad pointed out in Episode 2 of the HorrorFam.com Podcast: I love dancing pants. So… Second Place Winner!

The Wolf Man was a bit of a menace — and most definitely a “wolf!” — long before he was bitten by a werewolf. As a human, he was using a telescope to peep through women’s windows! Not cool, Man.

As a werewolf, the Wolf Man was a brutal killer. And while his human side, Larry Talbot, became ever more stressed-out and guilt-ridden about that fact in later films (I love Lon Chaney, Jr.’s portrayals of supreme distress!), in the first film, he was a little more selfish. Becoming a werewolf and waking up after a nighttime murder romp was just a bummer that put a damper on his rich playboy lifestyle.

I also dig his makeup and costuming. And that werewolf transformation effect is still KILLER, even though the film’s nearly 80 years old!

What Do YOU Think?

Well, there you have it. My favorite Universal Monsters ranked, in order, by who I think’s the most awesome.

My criteria clearly wasn’t scientific — I just ranked them by who I like the best. But I stand by my decisions.

I’d love to hear what YOU think though! Who’s YOUR favorite Universal Monster? Let me know in the comments!

Unless cited otherwise, all images featured were purchased from Movie Stills Database.