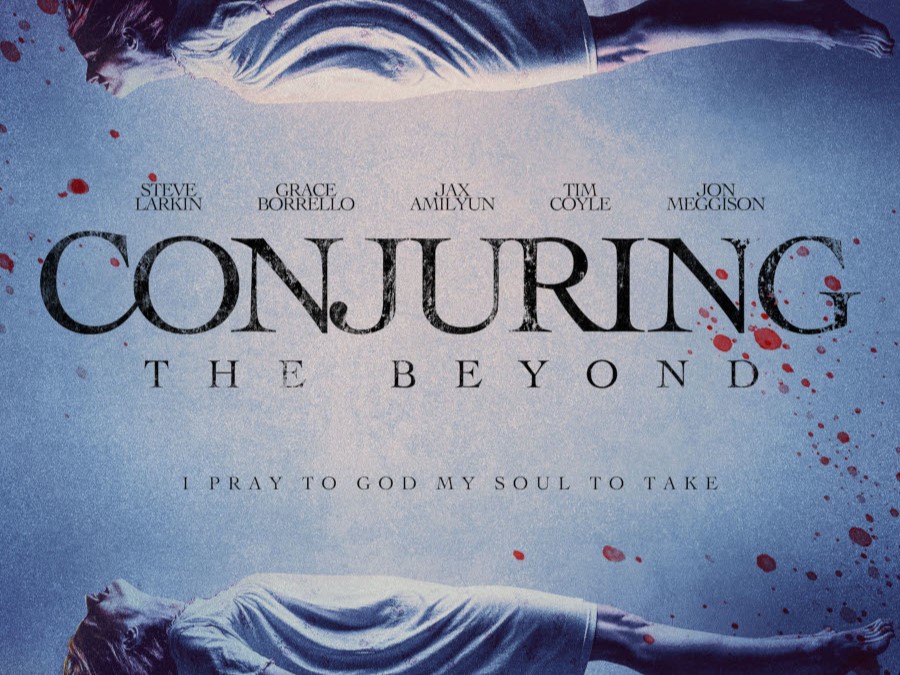 When Conjuring the Beyond, a 2022 horror movie about a sleep paralysis study gone awry (out on iTunes/Amazon Prime Video/Google Play/Xbox/Vudu TODAY, September 13th!!) showed up in my inbox, I knew I had to be the one to watch and review it.

As HorrorFam.com’s editor, when a screener copy of an upcoming horror movie hits my inbox (so exciting!), I try to make sure the film is seen and reviewed by the person who’d be the best fit for the movie’s genre — I always want the movie and its creators to be given the absolute best chance of being loved (because that’s what all creative babies deserve – their very best chance!).

As someone who has suffered from nightmares for the bulk of my life and has had bouts of sleep walking (and sleep eating), sleep talking, and – yes – occasional sleep paralysis episodes, I couldn’t wait to watch Conjuring the Beyond! The subject matter and the 90-minute runtime were both totally my jam…

…But did Conjuring the Beyond conjure delight within this avid horror movie fan?

Conjuring the Beyond is so frustrating. It comes SO CLOSE to being awesome so many times. I truly feel, if they’d just workshopped it a little longer — if they’d “slept on it” — it would have been AMAZING! I wanted so badly to love it, but it feels like this filmmaking dream was awakened too soon.

Conjuring the Beyond hints at so many potentially amazing plot developments and horror themes… and follows almost none of them.

For example, in the first 20 minutes, when the sleep study participants arrive at the lakeside facility – an abandoned elementary school – where they’ll be living for the next few days, Dr. Pretorious (a misspelled homage) mentions that the school served as “overflow for the local hospital during the COVID-19 pandemic.”

Hmm. Okay. The pandemic is still a festering open wound for many of us. Personally, the pandemic restrictions in my area made it so we were unable to visit a dying family member in the hospital and my own life-saving surgery was repeatedly delayed until I nearly wasn’t here to write horror articles for y’all. We ALL have our own pandemic-related traumas. So, to bring up such a raw subject in a horror movie, it MUST be important, right…?

My mind went wild with the possibilities! There have been multiple studies done on how the coronavirus has inflicted people with nightmares and how said nightmares have continued to affect people’s lives long after they’ve recovered. It would have been so uncomfortably topical and eerie to run with that and do a deep dive into, say, a secondary “pandemic” of sleep paralysis demons. It would still be a painful bit “Oof. Too soon…” but the horror genre is known for pushing boundaries and tackling our most uncomfortable, most culturally relevant fears.

They had an opportunity to conjure true terror here by combining both an extremely sensitive topic like the pandemic with the innate vulnerability that comes with the act of sleeping, especially for those who have known sleep paralysis first-hand.

Instead, that one line was all we got. That tidbit never came up again. It meant nothing to the plot.

And Conjuring the Beyond is chock full of half-formed ideas like that. It gives the movie a very, well, “dream-like” quality — you float from one vaguely cool concept to the next with barely enough time to say “Huh. What was that about?”

Topics like Post Traumatic Stress Disorder’s effects on dreamers, shared dreaming, the Night Hag… Just a few of the topics that are touched upon once and never revisited. All very cool ideas! Any one of the ideas/themes presented in Conjuring the Beyond would have been a great focal point to really dig into. But, instead of going after one or two core ideas and really making them great, we get a smattering of every idea possible going almost nowhere.

It might be silly, but the first “uh-oh” moment I had when watching involved the main character, Wanda, leaving for the sleep study. Full of determination to turn her life around, Wanda packs a suitcase (which caught my eye because I quite liked the vintage-ish style!), steals her brother’s car, and heads to the sleep paralysis study.

Then, as soon as she gets there, Dr. Pretorious’ assistant, Victor Fair (yet another homage) asks, “Don’t you want to get your things?” To which Wanda replies, “I didn’t bring anything with me.”

Excuse me? I know we as a species are rapidly losing our attention spans and our collective memory retention isn’t the greatest… But we can still remember events that happened less than 10 minutes ago, right?

Should You Watch Conjuring the Beyond?

Sure! Why not? It’s only 90 minutes long and you’d be supporting an indie horror film. Conjuring the Beyond will genuinely entertain you, even if it’s not always for the “right” reasons.

Conjuring the Beyond was a crazy mix of passion (you can tell the creators have watched, and love, horror movies) and ticking off horror movie trope boxes. For example, I know I’m not the best at reading the room, but two characters start banging out of nowhere. It was consensual, which I appreciated, but it was also like “Whoa. Okay. I guess they needed to check the ‘boobies’ box for the money people, huh?”

Truly, the only thing that actually bugged me about the film was when a “spiritual” character does a tarot card reading and the Death card is used to represent literal death. As someone who has been reading tarot cards for over 20 years, I visibly cringed so hard that my husband paused his work to ask if I was okay.

With the theme of Wanda finding her footing and restarting her life after a brutal divorce, the tarot reading moment — and the Death card especially — could have been utilized to bring home those themes of drastic rejuvenating change. How endings bring about new beginnings. Or, if they wanted to keep ramping up the homages, they could use the moment to relate Edgar Allen Poe’s musings on how sleep is a “little slice” of death.

I can imagine Conjuring the Beyond being a feature on The Last Drive-In with Joe Bob Briggs or on MST3K down the line. It’s “almost there”-ness, if embraced by the horror community, could make it a “cult classic” in another decade. At which point you can say, “I watched it when it was NEW!” and feel super cool and in-the-know.

Speaking of Mystery Science Theatre 3000, Calvin Morie McCarthy, Conjuring the Beyond’s writer/director, also helmed a 17-minute “mini documentary”/interview with Jackey Neyman, the woman who played young Debbie in Manos: The Hands of Fate (another horror movie that has so many “almosts” and leaves you wondering what happened behind-the-scenes!). If you’re still in need of entertainment after watching Conjuring the Beyond, check out Manos: A Conversation with Jackey Neyman (2015). It’s genuinely interesting!

Overall, I had fun watching Conjuring the Beyond and I tried my very best to be fair with my review. I’m VERY curious what this team will come up with next and I sincerely hope they continue honing their craft making horror movies! ♥

Nearly everyone in Conjuring the Beyond is still very new to the business (most of the folks involved had fewer than 20 projects under their belts — this was lead actress Victoria Grace Borrello’s very FIRST film, for example!) and it’s exciting to be a part of that process. After all, what is a film without an audience?

Conjuring the Beyond is out TODAY (09/13/2022) on iTunes/Amazon Prime Video/Google Play/Xbox/Vudu and wherever else streams movies. Lemme know what you think in the comments! And keep sending in your horror films for honest reviews. 😊