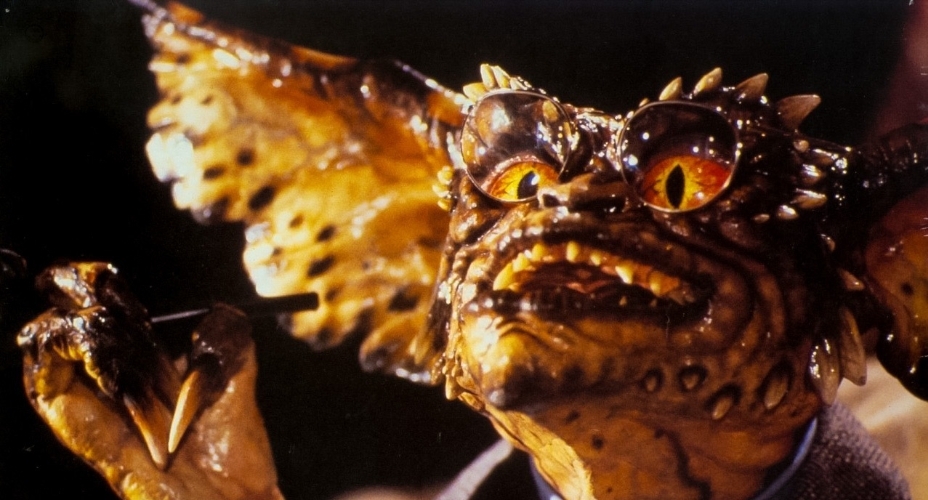 Okay, technically, there are ten glasses-wearing horror characters featured in this post if you count the Brain Gremlin from Gremlins 2: The New Batch in the intro/featured image up there. He’s too adorable. I couldn’t not include him.

However, the characters I chose (with some help from my dad, Rob Tharp) for the actual written post below are human glasses-wearing horror characters. Why? Because it’s over halfway to Halloween and the characters below are relatively easy to cosplay or use for Halloween costume inspiration!

Tired of giving up your eyesight for the sake of a cool costume? Been there. In my youth, I’d nix my glasses for the sake of cosplaying. But you know what ruins a cool cosplay pretty quickly? Endless squint-face and/or bumbling into things!

Time to emulate some horror characters who wear glasses. Work within your vision restrictions and still look rad.

First things first: This post is jam-packed with affiliate links to one of our wonderful sponsors/affiliate brands: GlassesShop.com! I buy all my glasses from them (since 2012) and I’ve been recommending them to people long before I became an affiliate of theirs. If you need affordable eyeglasses/sunglasses/fashion glasses but, for whatever reason, don’t want to support HorrorFam.com: Just go to GlassesShop.com to buy specs directly from the source.

If you DO want to support HorrorFam.com, use our affiliate link https://bit.ly/HorrorGlasses to shop for your glasses (we get a small percentage back, at zero additional cost to you!).

Low on funds but still wanna help us AND grab new glasses? First-time customers can get their first pair for free by using the code FIRSTFREE (doesn’t help us financially, but we’ll get brownie points for successfully linking you to their site — and we’ll feel warm fuzzies knowing you can see properly again!) or you can buy one pair, get one free with the code GSBOGO.*

*Note: These promo codes are valid at the time of this writing, but are subject to change. If they don’t work, click the Deals tab on their main site — they always have great discounts available, even if they aren’t these specific ones!

With that said, here are nine glasses-wearing horror characters! From here on out, any links to GlassesShop.com glasses in this post are affiliate links:

You know why Velma didn’t remove her glasses when she had her “hot girl” makeover in Scooby-Doo (2002)? Because those glasses are HOT! Totally stylin’!

Also, Velma’s a smartyboots and she knows bumbling around into things is good for laughs (“My glasses! I can’t see without my glasses!”), but to really capture a “Jinkies”-worthy hawt nerd girl look, ya gotta be able to see.

Whether you go for classic Velma (turtleneck) or makeover Velma (plunging v-neck) for your costume or cosplay will probably depend on your location/weather. Either way, the specs are a must.

These Velma-like glasses from GlassesShop.com are called “Defender.” Perfect for styling yourself as a gal who teams up with her buddies to defend us from mysterious ne’er-do-wells on a weekly basis:

It also featured some killer aviator-style eyeglasses on the main character!

Want the look? GlassesShop.com recently came out with their Vintage Collection — bringing back some fabulous retro looks from the ’70s and ’80s.

This pair is called “Robben” (like robbin’ bodies from your medical school’s morgue, perhaps?) and should work well for a Herbert West costume:

Total babe Barbara Crampton portrayed Dr. Katherine McMichaels in From Beyond. And, yes, she was also in Re-Animator (and Re-Animator‘s Jeffrey Combs is in From Beyond!); however, this is the movie where she wears glasses.

And what glasses they are, eh? Some folks may giggle at their dated style, but I dig ’em.

The great thing about jumbo eyeglasses with windows-like lenses? You don’t see your frames out of the corner of your eyes every time you’re wearing them! That’s always a huge plus, in my opinion. Being able to dress up like Dr. Katherine McMichaels in From Beyond? That’s just a sweet bonus!

The closest frames I could find on GlassesShop.com to Dr. McMichael’s are their “Oberlin” frames in brown. They’ve got the jumbo factor. However, if you’re dead set on having tortoiseshell frames and don’t mind scaling (slightly) down on the size, their “Beulah” and “Mandy” frames are also very similar style-wise.

4. Michael Myers in Disguise from Halloween (1978)

Michael Myers is kind of the king of comfort and accessible fashions, huh?

Usually, The Shape dons a one-piece jumpsuit (easy!); however, he became a memorable glasses-wearing horror character when he stole Bob Simms’ specs to accessorize his ghost costume in the original Halloween.

This outfit is the perfect “lazy” costume for the visually-impaired and I love it for that. Just a white sheet with eyeholes cut out (classic ghost costume) topped with glasses (so you can still see!).

I know hardcore Myers’ fans are a stickler for details and these GlassesShop.com glasses aren’t exact (sorry). But, for under $20 (at the time of my writing this), you can get the “Oak” frames, which are “close enough” for most folks. They’ll look even closer to the real-deal if you lurk in the shadows — which, come on, you were planning to do that anyway, right?

Look kinda like Uncle Fester, but you’re longing to hang out with hot babes and giant spiders? No problem. We’ve got your back.

GlassesShop.com’s “Drusilla” glasses should work for a Dr. Aranya costume. Don’t let the feminine name throw you, they’re unisex glasses frames (and are modeled by a man on their website!). All you need now is a lab coat!

Based on Stephen King’s novella, “The Body,” Stand by Me is filled with easy, comfortable costume inspiration…

Normally, it’s not advisable to emulate Corey Feldman. However, as Teddy Duchamp in Stand by Me, Corey’s costume is as easy as a white undershirt, a Hawaiian shirt (the Army Surplus store and Goodwill always seem to have some!), a pair of dark denim jeans, and the right pair of glasses.

Since Stand by Me is a period piece that takes place in 1959, I thought I’d have trouble finding Teddy’s glasses. You don’t see that style around much anymore — with the big frame arms! — but… nope! Easy-peasy.

GlassesShop.com’s “Hempstead” frames are everything you could want for a Teddy Duchamp cosplay (or crossplay, if you a gal looking for an easy costume!). They’re thick, black, wide-armed, and they even have the little silver dohickeys in the corners, just like Teddy’s!

I’ve already talked about my love for Beetlejuice three separate times before now, so I’m just going to cut to the chase on this entry:

Adam’s glasses are slightly more rectangular than these; however, wireframe glasses aren’t really “in” right now so I kinda had to work with the styles available. That said, GlassesShop.com updates their styles every month, so you may find something closer to the movie version if you hold out. For now, their “Dubois” frames have a “close enough” feel to Adam’s specs for costume purposes.

Okay. Secret Window isn’t the best… I saw it in theaters and felt pretty “meh” about it. I was overly hype/curious because Ellery Queen’s Mystery Magazine (which I had a subscription to at the time) had been promoting the movie for months before (and then after!) it came out. C’est la vie.

Secret Window is based on the story “Secret Window, Secret Garden” from Stephen King’s book of “short” stories, Four Past Midnight. The movie version is less of a horror-thriller and more of just… Johnny Depp falling asleep a lot (but without the FX extravaganza bloody wake-up call he gets for dozing-off in A Nightmare on Elm Street)

Anyway, one thing that wasn’t “meh” in the film: Mort Rainey’s glasses!

Dress in casual attire and munch on some corn on the cob. Zonk out at the Halloween party? No problem. You’re just staying true to the character!

My dad and I spoke about some of our favorite horror movies from the 1930s on the second episode of the HorrorFam.com Podcast. You probably guessed I’d have something super old-school on this list, right?

Hit this year’s Halloween party as one of the OG vampire slayers: Van Helsing!

It’s hard to tell is Van Helsing’s glasses are silver or gold (black and white movie…). Fortunately, GlassesShop.com’s “Glenview” frames are available in both colors! You decide. 😉

That’s all I’ve got for now!

Thank you for reading and for your continued support of HorrorFam.com! Thank you to GlassesShop.com for being an amazing affiliate (and for approving this post!). And big thanks to my dad for helping me brainstorm glasses-wearing horror characters!

Hope we helped you find some inspiration for your glasses-friendly Halloween costume or horror cosplay!

Note: Going forward, written/blog posts on HorrorFam.com will be going up on Tuesdays (this is the last Monday post!) and the podcast will air on Saturdays. ♥ (5/4/2020)