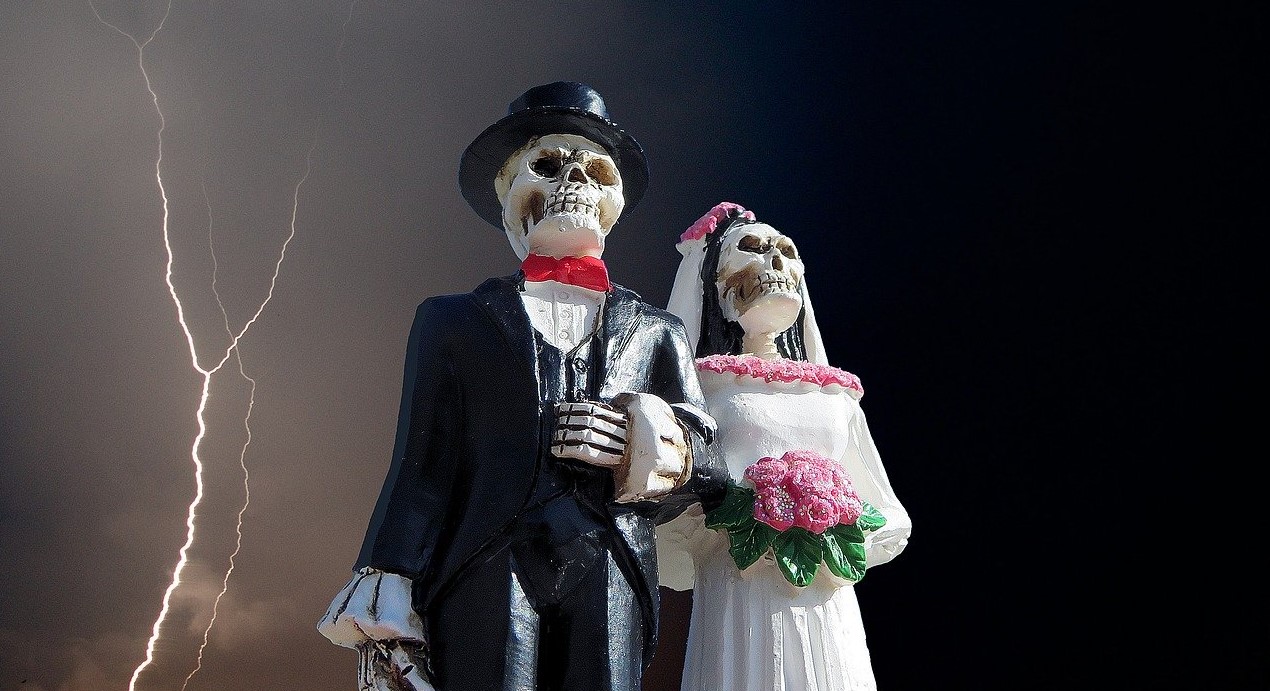 Short post this time! I have something very important to celebrate today, but it’s a Monday and you know I couldn’t leave my online horror family hangin’! New HorrorFam.com article goes up every Monday no matter what! 😉

Today, I’m just going to give a quick shoutout to some of my favorite married couples of horror. I have several favorite horror couples (I’m sure you do too!), but these folks tied the knot.

And I’m not saying other, non-wedded couples are invalid (many my personal fave horror couples aren’t married, to be honest), but I’m workin’ a theme there. Humor me.

ANYWAY, I’m also highlighting horror marriages that are portrayed as loving/supportive. These wedded couples aren’t destructive to themselves or innocents around them.

Obviously, right? Gomez and Morticia Addams are #CoupleGoals for pretty much all of us.

No matter what medium — comics, movies, television, cartoons — or who portrays them, Gomez and Morticia Addams stand strong as horror’s MOST loving, supportive married couple. (They were also great parents!).

While I’d watch The Munsters as a kid and be a little baffled by the leading couple’s marriage dynamic (we all knew Lily could do better, am I right? Sorry, Herman…); I’d watch The Addams Family and immediately, no further questions asked, “get” why Gomez and Morticia decided to spend their lives together.

You already know I have a soft spot for Beetlejuice. I mentioned it on my list of favorite ghost movies and I interviewed my dad about his practical special FX work on the movie. You probably saw this couple coming, right?

Adam and Barbara were lovingly wed until death… and beyond!

Whether or not you approve of their love for guns (or think they’re nuts), Mr. and Mrs. Gummer were portrayed as a loving, supportive married couple who shared a common interest.

Watching them fight as a team against the graboids in Tremors was a treat!

Maybe there’s additional backstory in the upcoming sequel that’ll change my mind about this; however, for now, I think Lee and Evelyn Abbott in A Quiet Place had a pretty solid marriage.

Lee and Evelyn are also the most traditionally “normal” folks on my Top Five list of married couples of horror. They’re not “kooky,” they’re not ghosts, they’re not survivalists (well, not from the get-go…), they’re not “into” the paranormal… They’re just a loving husband and wife who’re trying to make the best of a very bad situation for themselves and their children.

Not sure about the real-life couple these characters are based on; however, in the Conjuring series of movies (or, at least the ones I’ve watched thus far), Ed and Lorraine Warren made a good team.

They seemed to genuinely care about each other. And, while the real-life couple’s cases are debatable, in the movie series’ universe, the paranormal adversaries are very real. Now, running any sort of a business together with your spouse can be stressful… But add legit ghosts and demons into the mix? Now THAT is some serious strain on a marriage! And yet, Ed and Lorraine stick together, no matter what’s thrown at ’em. Props!

Oh hey! That’s me up there!

One year ago, today, Frank Spear and I got married. A few months later, we opened (along with my Maid of Honor, Christi Bandy, and my longtime gal pal, Heather Landry) HorrorFam.com!

We’re running a horror-focused website as a horror-lovin’ married couple.

Anyway, that’s where I got the theme for today’s article. And why it’s shorter than usual. I’m in a rush to go hang out with Frank and celebrate our first wedding anniversary!

Hope you enjoyed the list! Let me know who YOUR favorite horror couples are in the comments.