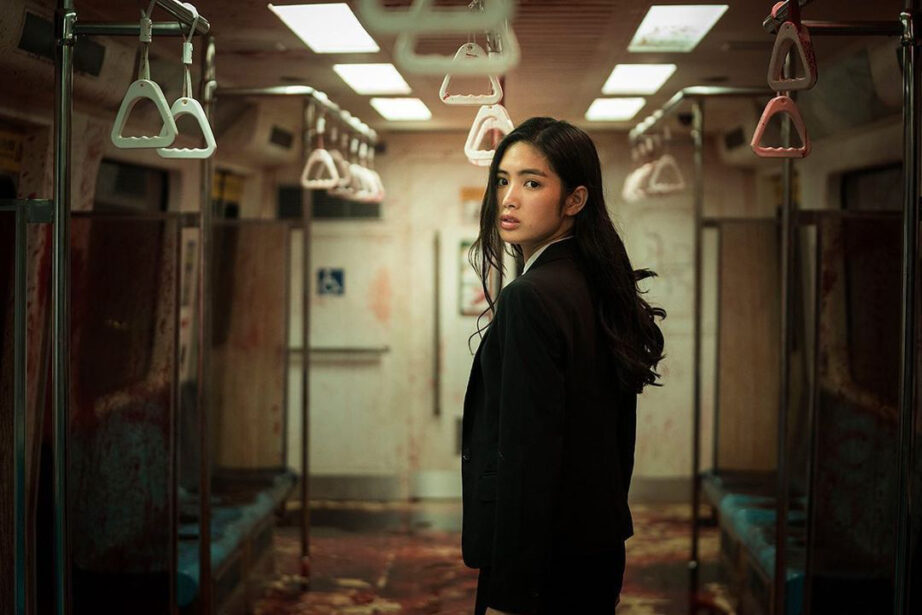 The Sadness is a 2021 Taiwanese film. When it began streaming on Shudder, I saw many of the horror accounts I follow on Instagram posting about it. It was described as being “so graphic” and “so gory” and “intense” that I made a note to check it out. Nine times out of ten, when people post about films that are brutal, hard to watch, and sick, they barely faze me.

I have a high tolerance for gore and enjoy SFX very much, especially if the artists can make the gore look realistic — which, let’s face it, many movies just don’t; which doesn’t allow me to suspend disbelief enough to get freaked out by it.

However, that changed when I finally sat down to watch The Sadness.

The Plot of The Sadness Won’t Surprise You…

The plot itself is a bit of an eyeroll and slightly tired (at least if you’ve seen any number of zombie films or The Walking Dead) — a loving young couple (Berant Zhu, Regina Lei) becomes separated during a virus breakout that results in the entire city turning into homicidal maniacs as the contagion spreads.

Throughout the film, you’ll watch them try to get back to each other as they meet with insane obstacles – extremely violent and armed citizens who have been infected, namely.

The duo must also avoid becoming contaminated, lest they transform into one of the bloodthirsty, insane residents who are quickly overtaking the city, using all manner of means and methods to dispatch the still-well citizens of the community (in very creative ways, I might add).

So, The Sadness absolutely does deliver in terms of body horror and gore. In its almost two-hour runtime, you may be tempted to look away, but you can’t. That’s because what you’re seeing is almost unbelievable and, yes, it’s disgusting and shocking… but it’s also fascinating.

…But the Gore Effects Will!

Bravo to the SFX team who created these gross kill scenes because they really are top-notch. The gore, while a bit over-the-top, (causing me to giggle in one scene) looks as real as it can possibly look, elevating this movie in every way.

Infused with horror, creepy dialogue, and lots of “what am I seeing?” moments, this film exceeded my jaded horror fan expectations. It really is graphic, gross, disgusting, and at times, shocking.

However, (minor plot spoiler + trigger warning) this is my one real gripe with The Sadness:

Too much rape and sexual assault. Honestly, unless I’m watching a “rape film” (Last House on the Left, I Spit on Your Grave) and know what I’m in for, I don’t really think sexual assault has a place in a movie like this. The gore would still be just as shocking if they didn’t include that, and as that’s one of my personal triggers, this made me super uncomfy, so be warned.

No, it doesn’t make me feel any less of the film, I just think it’s superfluous. However, it also ratchets up the shock value of the movie, so you can look at it from both sides in that regard.

The Sadness Is NOT Boring!

There are a couple of standout things about this film: One, the ending is excellent. And, two, despite the length of the movie, I never once got bored or even looked at the clock. It’s a bloody good time from start to finish, keeping you engaged with lots of action, crazy shit, and interesting visuals and location changes.

In summary, only watch this movie if gore doesn’t bother you a bit, because it’s billed as a body horror movie with good reason. If you enjoy a fun splatter fest that really goes for the jugular (pun intended) then it’s absolutely worth the watch. You’ll be completely entertained, grossed out, and even maybe disturbed (props to Tzu-Chiang Wang for playing the creepiest businessman ever, I’ll see him in my nightmares, ugh!)

But if you aren’t into gore, deranged, blood-spewing maniacs, creative and ingenious body mutilation, cannibalism, and more, then avoid this film because this stuff will sear into your retinas, and you can’t unsee it once it’s there! I’ll be thinking about this film for a long time to come!

Overall, The Sadness is a blood-filled, wild joyride for horror fans who think nothing can shock them anymore, because I was absolutely shocked (and nothing shocks me!).

Written and directed by Canadian filmmaker Rob Jabbaz, The Sadness is available exclusively to stream on Shudder.

Images purchased via MovieStillsDB and used solely for review purposes.