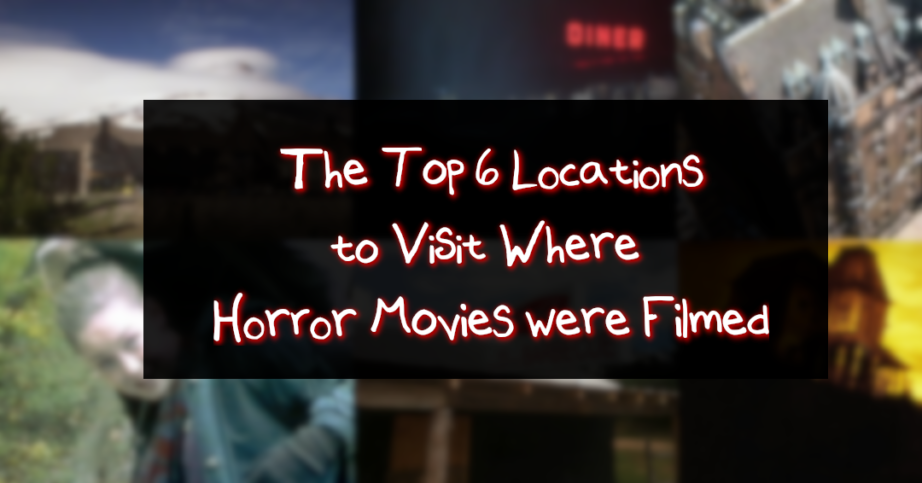 Setting is one of the critical foundations of horror: whether it’s a high school, abandoned house, apartment building, drive-in theater, rest stop, shopping mall, library, parking garage, attic or basement, elevator, forest, cave and so on.

This has made many a shooting location as famous as the murderous psychos, witches, demons, ghosts, zombies and vampires shot hunting there.

Some of these sites, filmmakers have carefully scouted out from dark and ominous nooks and crannies across the country; others they built to paralyzing precision from scratch.

Here are six of the most infamous locations where horror movies have been filmed in the United States:

Better known for the last four decades as The Overlook Hotel, this building set into the side of a mountain was originally built as part of the Depression-era Works Progress Administration designed to help Americans get back to work.

Today a National Historic Landmark, it also bears the distinction of being the face of every exterior shot of the fictitious hotel where Jack Nicholson’s “Here’s Johnny” went murderously mad in this adaptation of horror fiction master Stephen King’s terrifying novel.

The Timberline was not the location that inspired King to write this twisted tale of madness, however. That was the Stanley Hotel in Estes Park where he and his wife once stayed. The Timberline was merely Stanley Kubrick’s vision of the deadly getaway King described.

According to the lodge, management at the time of filming had requested Kubrick not shoot any scenes of room 217–the room number in King’s novel–lest it dissuade guests from staying there.

So, instead, Kubrick made the room number in the movie 237–a room number presumably not in the IRL lodge. Ironically, however, room 217 is still the room guests request most.

The Timberline now shows regular screenings of The Shining, and was meticulously rebuilt for its sequel Doctor Sleep.

Stream The Shining on HBO Max.

The Bates Motel may be the name of the location most people associate with this film, but the image of the Bates Mansion, the adjacent house where Norman and “Mother” lived is ingrained in the memories of anyone who’s seen it.

However, the house from one of the Master of Horror’s most notorious masterworks was no house at all but a set built on the Universal lot. You can even visit both motel and mansion if you ever stop by Universal Studios Hollywood for a tour.

Whether you view it from a safe distance on the tram during a backlot tour or you dare to venture onto the front porch for a photo op, you can’t help but wonder what went on there when Norman wasn’t stalking beautiful, young women.

Every Halloween, the theme park incorporates the house into its Halloween Horror Nights festivities.

The site of the fictitious Black Hills Forest where the genre-defying, found-footage, mock-umentary was shot was made all the more terrifying by the jarring, unfocused, poorly lit, perfectly amateurish handheld camerawork through which it was seen.

The challenge of seeing where the characters were located, let alone where they were going, made audiences feel as lost in this forest maze as the doomed “documentarians” themselves. And, the 6,300 acres of Seneca Creek State Park provided prime ground for fostering that hopeless feeling.

Today, the park sometimes holds guided hikes to spots where some of the film’s most iconic scenes were shot.

Besides being the site of all the exterior shots of the classic 1968 infant exorcism story, this palatial, gothic Manhattan apartment building on the corner of West 72nd St. and Central Park West was also where The Beatles’ John Lennon was shot to death on the sidewalk out front, directly past the main gates. He had lived here with his wife Yoko Ono.

The killer did not, however, cite demonic possession as his motive. Other celebs who rested their heads at one time or another here included Judy Garland, Rosemary Clooney, Leonard Bernstein and Lauren Bacall.

In Ira Levin’s notes for the original novel on which the film is based, he even likened the “rambling, shambling apartment house,” he envisioned for the setting specifically to the Dakota.

In the novel and film alike, the building is known as The Bramford and has its own dark and checkered history.

This shooting location is so obscure that it doesn’t even have a name–just a description: The Gas Station. In fact, before it was “The Gas Station,” it was legit abandoned. And, yet, horror tourists from far and wide have flocked to it year after year to come face to face with the site where Leatherface slaughtered his helpless prey.

Today, the spot is a barbecue restaurant–the connection between a meat-serving eatery and a maniac wearing a face mask made of human skin is no coincidence.

Capitalizing on its cult fame, the former filmic trap for doomed youth is also now an honest-to-goodness tourist trap for fans of the franchise, selling horror merch and renting cabins for the night for those who dare.

You’ll have no problem finding it either–just look for the sign that reads: “We Slaughter Barbecue.” And, to order by phone, just call 512-321-SAWS, of course.

Known as Crystal Lake Diner in the movie, this 50s-style diner built in 1949 still serves a full menu of fare today.

Every Friday the 13th, the diner welcomes some of the film’s original cast members for a special celebration.

This includes guided tours of some of the local spots featured in the film, like Camp Crystal Lake where the fated counselors met their fate at the hands of Jason, the hockey-mask-wearing killer, and the unforgiving blade of his machete; in reality, it’s an actual Boy Scout Camp named Camp No-Bo-Be-Sco. How wholesome.

Stream Friday the 13th on Paramount+.

Images purchased via MovieStillsDB or via movie screenshots.

Frank Moraes is a freelance writer specializing in technology, business, and film/television. He combines them all as an editor at the cord-cutter website HotDog.com