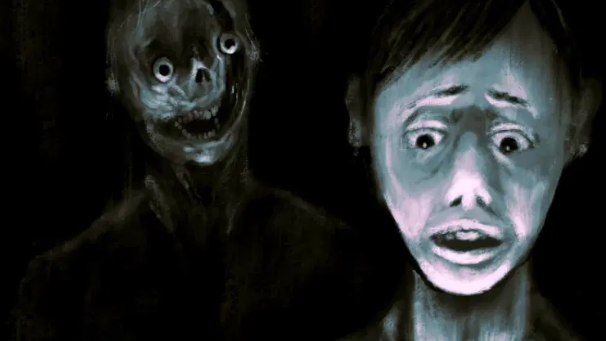 The opening quote from Flicker

Are you looking for a quick read that guarantees to have you sleeping with the lights on? Then look no further than Flicker.

Flicker is a Kindle eBook download penned by Jed Shepherd, who also wrote the 2020 movie Host — a movie filmed and released during the pandemic that went on to be a fan favorite on the streaming service Shudder. Adding to the credibility of Jed Shepherd’s ability to add genuine spookiness to Flicker: According to the Science of Scare project by Broadband Choices, Shepherd’s Host was scientifically proven to be one of the scariest movies of all time (you can check out the full details on that project and view the rest of the list via Bloody Disgusting).

As if that wasn’t already awesome enough, this Flicker also includes blood-curdling images by Trevor Henderson, a Canadian horror artist known for creating internet cryptic creatures such as the infamous Siren Head.

Jed Shepherd and Trevor Henderson make a fantastic duo and I personally hope this isn’t the last time we see them work together.

The Plot of Flicker:

A (very) short story, Flicker, clocks in at only 19 pages and revolves around a journalist who visits a reclusive scream queen named Veronica Joy to interview her for the anniversary of her most iconic film, The Flicker Man. You see, after the success of that movie, the actress locked herself away in her creepy mansion and quit acting for good.

Meanwhile, stories of strange happenings that plagued the cursed production have been floating around for decades. These include crew members being found completely torn apart, some with body parts missing but still barley alive, not to mention a suicide.

This raises questions like: Did the ritual performed in the movie actually summon The Flicker Man? Is the boogeyman from the actress’s past real? Veronica Joy assures the journalist (and us, as readers!) that it’s all true.

The Flicker Man Could Be the Next Horror Icon!

The power of the mythology paired with visuals makes you feel like you’re right there in the room with these characters. The journalist, who’s name I don’t believe we are ever given, is eager to get the story on his favorite movie star. He wants to uncover her deepest, darkest secrets. Despite her wanting nothing to do with it, he performs the ritual to see if he can really summon the entity known as The Flicker Man.

Veronica Joy only wants to story to be told to stop a remake from happening. She wants everyone to know the consequences of what will occur if they play with danger — and she wants them to know that the evil will stop at nothing.

The journalist performs the ritual from memory and enters the metaphysical barrier between time and space. So she As you can probably guess, things get really creepy and unsettling from here.

The abominable figure begins to then stalk the main character throughout the rest of the story. Each image of The Flicker Man practically leaps off the page. I think The Flicker Man has all the makings of the next horror icon, especially if this ever gets adapted to film.

Flicker’s Psychological Terror Will Stick with You!

If you enjoy movies like Sinister, Insidious, or The Babadook, this has that same kind of slow burn psychological terror atmosphere to it. Ask yourself:

“If you could prove the existence of the supernatural by performing one ritual, wouldn’t you do it? Just to know for sure?”

A quote from Flicker’s fearless reporter

The story of Flicker doesn’t overstay its welcome but will stick with you long after it’s over. Even if you aren’t an avid reader, I promise you’ll get just as much out of this as a movie packed with jump scares. Seriously, you can put the Kindle app on just about any device and download this for a dollar. [Editor’s note: at the time of this article – prices are always subject to change! -L*]

If you’re a horror fan who loves a good supernatural campfire tale that would fit in well with any of the Scary Stories To Tell In The Dark-type anthologies, I highly recommend that you let The Flicker Man visit you, just keep that candle burning!