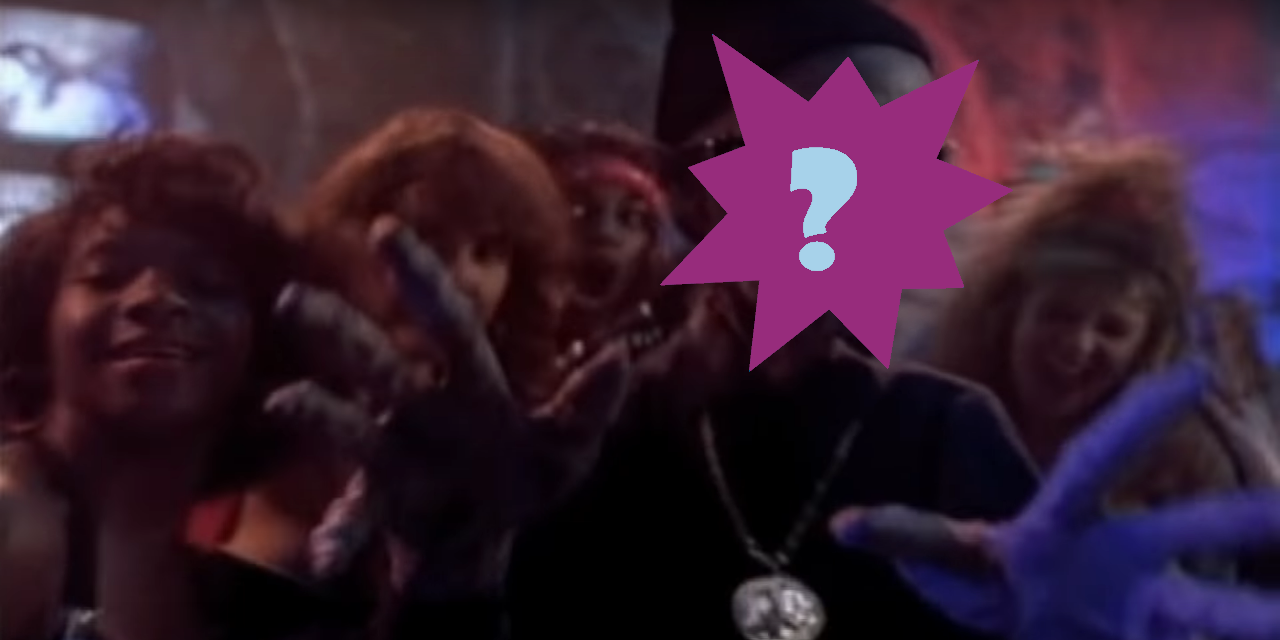 Few genres utilize music with as much effectiveness as horror. Jaws used two notes to keep an entire generation out of the water. The “Thriller” mini-movie took a novelty song about going to the cinema and made it into a sales record-breaking legend.

Not every music video tie-in works quite that well.

Let’s do the monster mash with some clips that aimed for the stars, but ended up in the dustbin:

“We Love to Rock” for Rock & Roll Nightmare

1987 was a simpler time. Physical media was still king, the “M” in MTV was more than just an initial, and video stores were a treasure trove of both theatrical and direct-to-video horror releases. A steady stream of hidden gems lay under the florescent lights for those willing to search the shelves…

Rock & Roll Nightmare was not one of them.

The plot of the film would be enough to make for a decent Heavy Metal magazine cover painting, but it failed to fill the runtime of a theatrical feature. To make up the difference, lead actor/songwriter Jon Mikl Thor battles some otherworldly demons while stunning this realm with the power of his rock & roll.

Too bad the songs sound like an aging bodybuilder took a liking to both Dire Straits and This is Spinal Tap. Like an aural version of The Room, the song and video are a brilliantly bad monument to one man’s hubris.

Watch the “We Love to Rock” music video on YouTube.

“Are You Ready for Freddy?” for Nightmare On Elm Street 4: The Dream Master

There comes a point in every long-running horror franchise where the killer becomes a vehicle to sell merch rather than being truly scary. By the fourth installment of Nightmare On Elm Street, Freddy Krueger was a cottage industry. You can tell this song and video exists purely because of some exec trying to capture a demographic.

So Freddy rapping alongside beatbox pioneers The Fat Boys should be a license to print money. Right? RIGHT?!

Ignoring how weird it is to market a child molester character to children and teens, both Robert Englund (in full Freddy makeup) and The Fat Boys are doing their damnedest to sell this silly thing as a viable theme song. In practice, it probably made people wistful for the dulcet tones of Dokken, which is a phrase I hope I never have the occasion to type again.

Watch the “Are You Ready for Freddy?” music video on YouTube.

“Crypt Jam” for Tales from the Crypt

Tales from the Crypt was one of the first HBO exclusive television series, each week adapting stories from vintage EC horror comics. The show and its wisecracking animatronic host became an unlikely pop culture sensation.

The mix of high camp host segments and gleefully gory main stories was a smash hit with adults and a favorite forbidden fruit for kids. Amongst the many marketing tie-ins was the obligatory soundtrack album.

Rap music/horror film mashups were one of the most inexplicable fads of the 1990s, and I could do an entirely separate list just of those who tried and failed. To be fair, The Cryptkeeper (John Kassir) does a better job than most of staying on beat.

Zombie breakdancers and rump-shaking ladies surround the puppet of an undead corpse as he spits bars full of groan-inducing puns. Even for a show that reveled in its pulpy origins, the glorious schlock of it all must be seen to be believed.

What did I just say? This poppy hip hop track was the theme for the 1991 film, and you may be tempted to console yourself with the fact that MC Hammer is at least nominally a professional rapper.

The goofy digital severed head hopping along with the beat is endearingly shoddy. Green screen film inserts make sense in context. And calling Cousin It “a perm with feet” is actually pretty funny.

Then the chorus hits. Again, and again, and again. Space-time loses meaning, civilizations rise and fall, a generation lives and dies… Yet the refrains keep on coming.

Finally, you fall under the spell of the maelstrom of repetition, harem pants, and poor life choices. Having lost the will to fight, you give in to the madness by bopping along.

This song is such an evil earworm, it wouldn’t surprise me to learn that MC Hammer had sold his soul to Satan for a last Top 10 hit.

“Rock Until You Drop” for The Monster Squad

The Monster Squad is a fun little family-friendly spook show about a group of friends who have to save their town from the classic Universal horror monsters. Imagine a low budget Goonies, with way cooler antagonists.

Sounding like the lovechild of Huey Lewis and a Pixi Stick, this song is more prototypically 1980s than the required montage it plays over in the film.

You could dress an economy-sized can of Aqua Net in a color-change tee shirt and a pile of mismatched jelly bracelets, then toss the can into a Delorean on its way to pick up Michael J. Fox…and it still would be only a shadow of how ’80s this is.

Michael Sembello’s “Rock Until You Drop” is all synths, sugar, and drum machine snaps. It’ll kick you out of a funk faster than getting a Skeletor action figure on Christmas morning in 1986. Give in to it, and then go check out the extended version. Ahead of their time, the main cast raps.

Watch the “Rock Until You Drop” music video on YouTube.

Did I miss any of your favorites?

Want another list of horror movie music from beyond the grave?

Do you find my taste questionable?

Tell me about it in the comments below!

G.G. Graham is a cult film cryptid, horror hag, and exploitation film explorer of the dusty and disreputable corners of cinema history. The street preacher of Z-grade cinema can be found at www.midnightmoviemonster.wordpress.com or on Twitter @msmidnightmovie