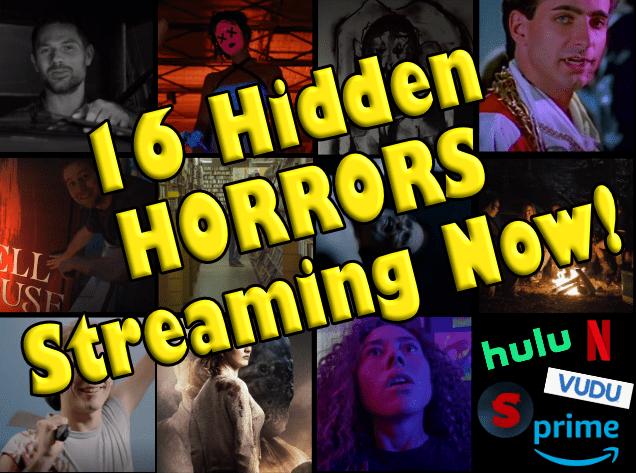 Tired of scrolling through Netflix, Hulu, Shudder, Vudu, and Amazon Prime only to see the same old movies you’ve likely already watched? Check out these 16 hidden gems you may not have heard about or seen yet!

Though most of us stay plugged into horror news and new releases, there are always some movies that fly under the radar. I found, watched, and enjoyed currently streaming horror movies listed below:

I don’t know how I missed this 2015 British film, but it’s the suspenseful story of a handful of train passengers who end up on the night train under a full moon.

The train breaks down, and they’re alone in the dark with some pretty fierce werewolves. Strong characters and a fast-paced storyline make this flick a lycan-filled pleasure! (Shudder)

Are you a fan of Adam Green’s Hatchet series? Then dig a little deeper and catch up with one of his best films pre-Victor Crowley.

The plot to Frozen sounds simple, basic, even. A group of friends gets stuck on a ski lift when the ski resort closes for the holidays on a snowy night with a blizzard in the forecast. It’s absolutely terrifying and incredible! (Vudu – search free movies)

This is a more recent indie film that just blew me away. It’s a modern-day retelling of Frankenstein, and it’s absolutely horrifying and heart-wrenching at the same time. Simply beautiful. (Hulu)

What would you do if your brother told you he had Satan trapped in his basement? That’s what one couple comes up against one creepy Christmas season.

Driven by incredible acting and sheer terror, this movie doesn’t need flashy effects and a huge budget to completely creep you out. (Hulu)

A young woman struggling with life seems to find a solution to her irritating mother via witchcraft. But, like most things in life, be careful what you wish for!

This Canadian movie is great at building that feeling of anticipation and absolute dread. (Hulu)

It’s not really a horror movie, but I can’t not include it — it’s too good! The Fare is more of a “fantasy” film, and I don’t want to say too much. Just watch it. (Amazon Prime)

There have been movies done before about kids’ imaginary friends coming to life, none that I’ve seen are this spooky.

Z doesn’t just want to play, he wants to take over! (Shudder)

Enjoy movies that make you feel like you dropped a hit of acid? Then Bliss is right up your alley.

This movie is what I imagine it feels like to be dropped inside of a painting. It’s perfectly fitting that the story revolves around a brilliant female artist who has hit a creativity roadblock and finds the perfect solution for jump-starting her masterpiece — and it’s bloody. (Shudder)

Australia’s version of the whole “kidnap-a-group-of-people-dump-them-in-a-forest-and-hunt-them” genre is refreshingly different from other films in this category. Maybe the reason is because all of the victims are female?

It’s fun to see these chicks get tough against their weapon-wielding assailants. Bonus: LOTS of gore via practical effects! (Shudder)

A group of people sign up for a slasher-themed weekend of camping. But when do reality and fiction blur into one?

This is a fun film that I stumbled onto randomly but it definitely deserves more credit. (Shudder)

If you haven’t seen the Hell House LLC trilogy, are you even a horror fan? (Just teasing! But you really should watch them).

These are honestly some of the scariest movies I have seen in years, and I actually had some clown nightmares after the first film.

What happened in this house and to the people who were there filming? You may not want to see. (Amazon Prime, Shudder for the sequels)

This lowbrow film is pretty polarizing. You either love it or you hate it. It’s tacky, disgusting, and freaking hilarious.

Goofy catchphrases, unforgettable characters, and ridiculous stories make this story of an old man who likes to strangle folks while he’s covered in grease a wild ride. I watched it twice then told everyone I knew to watch it. (Amazon Prime)

Sharp, clever, and relevant: Tragedy Girls is the Heathers of the Millenium.

What happens when social media stars decide to go on a murder spree to boost interest in their online true crime show? This is a really cute and fun film, and I love the masks, too. (Hulu)

Two brothers cleaning out their dad’s video store after he passes away find a retro VHS game that isn’t like any other game. Once you get in, you may not get out.

Genre favorite Barbara Crampton has a part in this super entertaining and highly nostalgic film. (Hulu)

I only discovered this movie a few years ago, despite the fact that it’s an ‘80s slasher. I’m so glad I did. First, because Thanksgiving horror films aren’t too prevalent; and, second, because it’s amazing.

One twin is out of the insane asylum killing people and the other (identical) twin isn’t. Which is which?!

I am now outing myself as a super geek: This is one of my guiltiest guilty pleasure films. I LOVE Rockula.

Remember Summer School? The guy you loved who played Chainsaw, Dean Cameron, is Rockula, a teenage vampire who has a legacy to fulfill.

This odd and wonderful movie gets even weirder with appearances by musicians Thomas Dolby and Toni Basil — the latter of whom plays Rockula’s mom. It’s ‘80s fabulousness (well, 1990, but you get the idea) and so much FUN! (Vudu, free movies)

Those are my lesser-known horror movie streaming favorites for June! Did you enjoy this post…? Should “hidden gems” become a regular HorrorFam.com feature/category? Let me know in the comments!