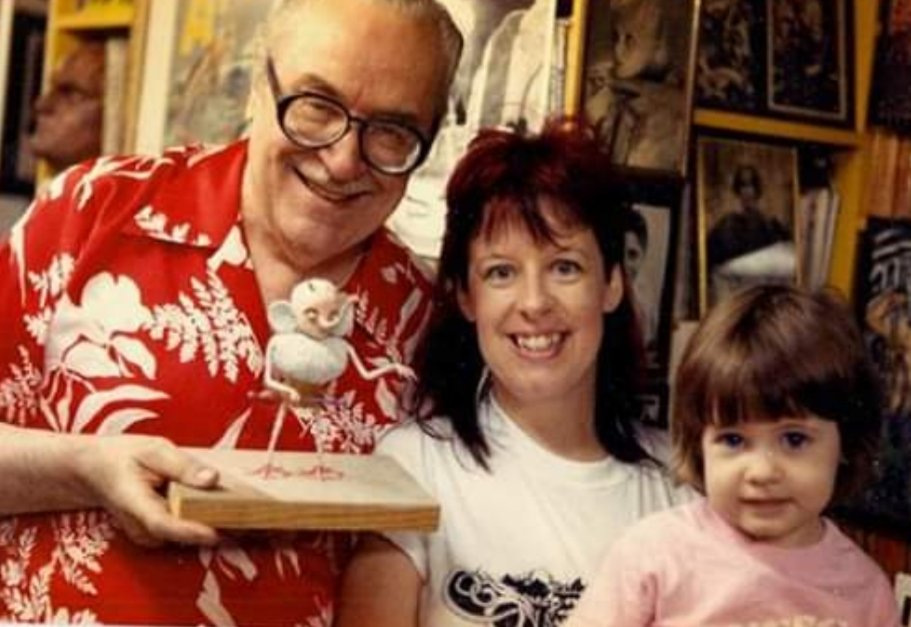 When I was a youngster, on one of many family trips to the Ackermansion, Forrest J Ackerman asked me, “Lauren, what’s your favorite thing in my house?” Without blinking an eye, I responded: “You.”

My response remained true until “Uncle” Forry’s passing in 2008 (age 92 and still too young to go!). Of all the cool “things” in his Ackermansion, he was the coolest.

But my childhood response to Forry is often my response today, regarding the horror genre in general. It’s the primary reason I, along with my husband and two horror-lovin’ gal pals, created HorrorFam.com!

There are numerous wonderful things about the horror genre. But my absolute favorite thing about it is YOU — the horror community.

Horror friends are the best friends. Here’s why:

However, from an observational standpoint — when comparing my horror-related social media feeds to my business/”normie” feeds — it seems like the #HorrorFamily (and #MutantFam) has been passing with flying colors.

While the general population is 1000% freaked and sometimes, sadly, lashing out, the horror community has reacted to these strange times with relative calm. There are exceptions, of course; however, for the most part, horror fans have remained logical and refreshingly optimistic!

I’ve written before about the science behind why/how the horror genre can increase our “distress tolerance.” In short: Horror fans have experienced fear and horrifying situations so many times in a safe, fictionalized, environment — via movies, television shows, books, art, video games, etc. — that they’re more prepared when faced with REAL horrors.

In general, even those of us in the horror community with anxiety issues (me) are far less prone to catastrophizing. Horror fans are subjected to fear stimuli on a more frequent basis than the Average Joe and, because of this, they’re better equipped to determine a threat’s severity.

In other words, your horror-loving friends will give it to you straight: They won’t make mountains out of molehills. And, if the situation is a “mountain” (like this year’s pandemic), your horror pal can help you navigate it in a rational manner.

This level-headed reaction to terror comes in handy when facing personal fears as well. Which plays a part in why…

For better or worse, horror is an impressively variety-filled genre! Horror spans across every medium and tackles every topic imaginable.

Even now, while most folks sit around bored and struggle to adapt to their newfound restrictions, horror fans are finding new ways to flex their creative muscles and give back/bring joy to the community.

Self-doubt and social fears loosely fall into the “flight” category of our brain’s “fight or flight” response system. So, whereas most folks might shy away from getting a little too creative — or be afraid of social judgment to the point of not sharing their work — the horror community’s like “How about we make a movie where people’s mouths are stapled to other people’s butts and they walk around together like some kinda arthropod?”

Okay, maybe we do get a little too “creative” sometimes… But what the hey! We’re putting ourselves out there, right? We’re living the dream. Making it happen!

We’re fans of a genre where “anything goes” and we don’t shrink away from strange or, sometimes, uncomfortable subject matters. Which plays a part in why…

This one might seem strange to non-horror fans. Since we love a genre filled with fear and gore, we’re often labeled as “monsters” by outsiders.

Well, people can be monsters and monsters are people too. We’re, generally, a kindhearted bunch — even if we are, admittedly, a little “weird.”

Here’s a drastic example from my personal life: I was sexually assaulted in 2008 by a young man who vehemently shunned the horror genre. And while it’s perfectly fine to not be a horror fan (really!), my attacker’s complete rejection of horror to the extreme, in my opinion, played a role in why he was such a @#$% human being.

Here’s the thing: Suppressing your emotions or refusing to acknowledge your grey (or dark) areas never works. In fact, it usually backfires horribly. Folks who actively deny life’s inevitable horrors — large or small, reality-based or solely mental — typically end up becoming the very terrors they so adamantly rejected.

On the other hand, your horror friends have (virtually) experienced every darkness imaginable. They’ve basically put themselves through a form of voluntary exposure therapy and, intentionally or not, come out the other side more “balanced” because of it!

We’ve faced our inner darkness and wrestled with our potential fears, even if it was from the safety of our couch! It also helped us to be more understanding, more empathetic. We know that people make mistakes, there’s hidden beauty to be found in ugliness, flaws can be untapped strengths, and nearly everyone — human, creature, or other — has feelings.

In general, horror friends are more accepting. We know we’re weird, so we have a higher tolerance for “weird” in others.

That said, we’re not a completely jerk-free community. Don’t get me wrong. As my dad used to tell me when I was growing up: “People are people wherever you go.” Get any group of people together, any fandom, and you’re bound to get a few jerks in the mix.

And, obviously, “normal” people can also be kindhearted and absolutely lovely! They’re not all seconds away from snapping. Seriously! I know plenty of normal folks who’re peachy. And having a variety of friends and interests is healthy.

But, if you’re reading this because you’re new to the genre and were nervous about making horror friends: I hope I set your mind at ease. We’ll treat ya right!

And, if you’re already a horror fan (as are most of our readers and listeners!): I hope I made you feel validated and deservedly awesome.

3 thoughts on “Horror Friends Are the Best Friends: Here’s Why!”