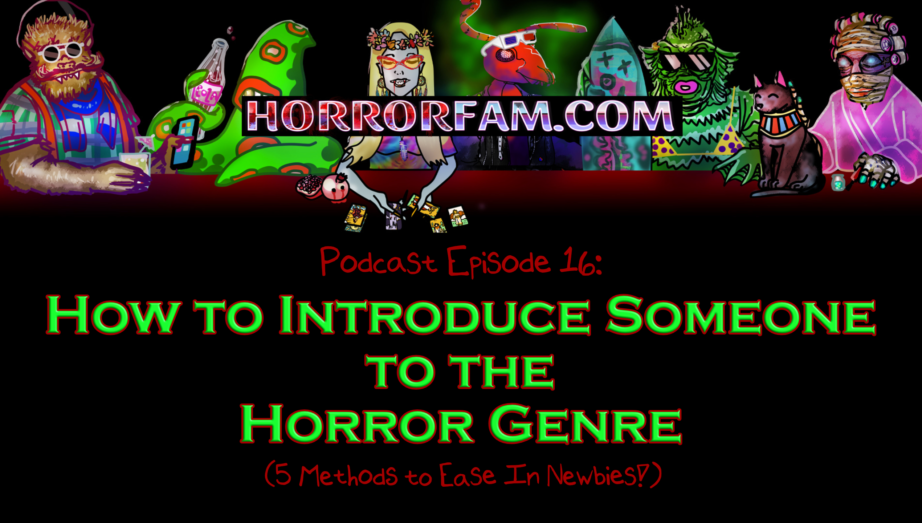 Hi, Everyone! My name is Lauren Spear. Welcome back to the HorrorFam.com Podcast!

And, since this is sort of a reintroduction to our show, I wanted to play with that idea a little bit and cover a topic that’s sort of related. And that’s: How do you introduce someone to the horror genre?

I’ve been asked that question several times personally and I see it pop up on horror Twitter a lot. And, a lot of the time, it’s in regard to younger viewers — like “how do you introduce a kid or a tween to their first horror film?” Like what are some good picks for doing that…

But I see it in regard to adults as well.

Like, “I have this friend whose never watched a horror film or who just isn’t into the genre or has never shown an interest, but I wanna expose them to it and get them into it!”

And I think that’s such a great question and such a great topic to cover. And I’m excited to get into it! I hope you are too!

And if YOU have a friend that you want to introduce to the horror genre, these are my five tips! Well… Mine and the co-founders of HorrorFam.com! OUR five tips for how to do that.

Number One is to manage your friend’s expectations.

So, I wrote about this general idea last March on the HorrorFam.com blog but, basically, if you tell your friend that they’re about to watch a horror movie and that there’s a good possibility that they’ll be frightened or disturbed that’s actually going to help them handle it a little bit better.

By managing their expectations by being honest with them about what they’re about to view, you’re already kinda helping to ease them into it and sort of diminish some of the discomfort that they may have felt if you hadn’t told them. Y’know?

So, you know, manage their expectations. Be honest with them. Tell them “This is a horror film.” And that will help ease them into whatever your movie pick is.

2. Watch Horror in a Group Setting for a More Positive First-Time Experience

And, Second, Christi Bandy, who wrote our article on the “20 Best Tween-Friendly Horror Films,” recommends that first-time viewings — for any age — be done in a group setting.

And I thought that was SUCH a great tip! Because watching horror movies alone in the dark? That’s kind of more of a “pro” move and it’s not for newbies. But that’s not something that we, as horror fans, would think of because we’re so used to just…doing…that. [laughs]

So, yeah. You have to remember what it was like to be new to it. And I think a lot of us got into it, you know, having other people around us.

So, if you really want to introduce your friend to horror and have it be a positive experience, don’t just hand them the Blu-ray and walk away. Watch the movie WITH them! And, if possible, gather some of your other friends to join you guys too!

Horror movies were a staple at the slumber parties that I went to when I was growing up and even the kids who weren’t as naturally drawn to the genre as I was always seemed to have a lot of fun when it was viewed with a group.

It’s that kind of mixture of “peer pressure” and, like, wanting to rise up and be brave and cool for your friends and also, more importantly, the feeling of being safe with your pack.

Like, when you’re with a group of friends who you feel safe with… You know you’ll be okay, no matter what’s happening on the screen. Any sort of terrifying thing could be happening in the movie and, if you’re with your trusted buddies, it helps to alleviate that tension.

3. Find Ways to Alleviate Tension to Ease Them into the Horror Genre

And that’s actually my Third tip! Which is: Find ways to alleviate tension for the horror newbie.

One of the things I always suggest is to start off with a horror comedy. For me, that mixture of scares and laughs is a perfect combo. And many of us make jokes when we’re scared or uncomfortable anyway so having the characters on screen do that too is just… It’s cozy! [laughs]

And then my dad, Rob Tharp, who you may remember from some of the previous podcast episodes, said that if your friend is an adult, you can show them pretty much anything if you’re really enthusiastic about it. Like, your enthusiasm will rub off on your pal…

And, that if it’s a movie you’re super familiar with, you’ll be able to help alleviate their tension by saying stuff like “Oh! Do you see that actor…? He was in such-n-such!” or “That effect was done with corn syrup and latex!” Like, your knowledge of the film and ability to provide trivia can be a welcome distraction and also diminish your friend’s fear response which will help them have a positive experience and ease into the horror genre a bit more… [sheepish laugh] Thoroughly? Well? They… They’ll like it better!! [laughs]

And then my dad also suggested that you could choose a horror film based on one of your friend’s pre-established interests. So, for ex… [chuckles] The example that HE gave was “If your friend is really into Civil War reenactments, you could show them Abraham Lincoln: Vampire Hunter.”

Or, you know, if they’re into cave diving you could show them The Decent.

So, by making the “base” of the story something that your friend is already familiar with, it gives them something to hold onto and ground themselves with when things start to get wild. And, you know, it also gives them an additional reason to be interested and feel invested in the story which is, you know, something a little extra there to get ’em into it!

And then you can also go… Like, if none of that appeals, you can go for something…

I guess this is Number Four? [laughs].

4. Choose a (Relatively) “Safe” Pick by Seeking Out Horror Films with Mainstream/Crossover Appeal

You can go for a relatively “safe” pick. Like one of the horror movies that manages to hit the mainstream and just… all the Normies feel compelled to watch it. You know. So they don’t miss out on the “watercooler” talk?

Like, in the ’60s, it was Psycho. Jaws and The Exorcist were kinda the Normie horror films for the ’70s. And then Silence of the Lambs in the ’90s.

Those movies went beyond being just niche films for horror fans. Like, everyone and their grandma watched those movies! It was just… you know… They had to! It was the thing to do!

And those films do have a lot to offer! So… you know? Not a bad choice either way! And, you know, they play it a bit safe and serious, but they’re fun, y’know? They’re still horror movies!

So, if there’s a horror movie that EVVVVVVVVVVVVVVVVVVRYONE is talking about — whether they’re horror fans or not — then that might be a good “Introduction to Horror” pick for your friend! You can approach them with, like, “Did you want see that movie everyone is talking about with me?” And they’ll probably say “yes” and then that’ll be kinda your gateway to be like “Oh, well, you liked that movie? Then why don’t we watch something really weird??”

Last, remember that you have more options than “just” movies for introducing someone to the horror genre!

For many of us, books — like RL Stine’s Goosebumps series — or comic books — like Tales from the Crypt or The Vault of Horror — were our starting points.

If you’re like my husband, Frank Spear, his starting point was video games! So, horror video games can be a great introduction to the genre.

And our mascot illustrator, Heather Landry, she loves poring over horror-themed artwork. So don’t discount things like paintings, sculptures, or pop-up books! Those are also viable gateways to the genre.

If your friend isn’t ready to watch a movie, you could still show them some of your favorite movie posters! Or, you know, old VHS covers from horror movies from back in the day… If you’re, you know, old enough to remember that stuff. [laughs] Like… Like I am.

You can show them, like, “here’s the stuff that… I loved looking at this!” or “This SCARRED me and I want to show it to your too!” [laughs].

If you think back and you can come up with answers to those questions then you’ll have a pretty good place to start! Or… you’ll know where not to start if your start was kinda rough.

And… yeah! Thank you for listening to the HorrorFam.com Podcast!

If you liked this episode, or any of our other content at HorrorFam.com, please consider supporting us at Patreon.com/HorrorFam

Until next time… Bye!

After I filmed this episode, Dad and I were talking about what would be a great horror movie suggestion for HorrorFam.com watchers/readers/listeners to share with the horror newbie in their lives.

There were, of course, a TON of movies we could suggest; however, one movie kinda hit ALL the marks in regard to the tips we shared above: Ghostbusters (1984).

It’s also well-suited for ANY viewer who’s a horror-watching appropriate age (we always recommend against exposing anyone under six years old to horror films). And, of course, Ghostbusters was one of the big mainstream/”normie” crossover horror flicks for the 1980s, becoming a pop culture phenomenon that had an enormous impact on society and a massive influence on genre films going forward.

If you were feeling stuck trying to think of which horror movie to show your friend and/or child, Ghostbusters is a fantastic choice!

What do YOU think…? Which movie did you (or do you intend to) show the horror newbie in your life? Let us know!