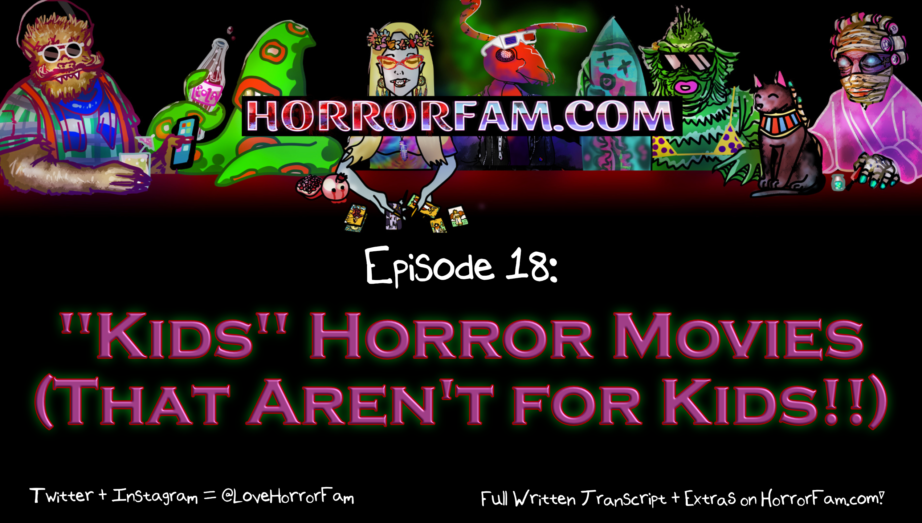 HorrorFam.com Podcast host Lauren Spear shares her thoughts on one of her favorite horror movie subgenres: “Kids” horror movies that are NOT for kids! Do you have any faves in this “who the heck was this made for?” category of film? Let us know in the comments!

My name is Lauren Spear. Welcome to the HorrorFam.com Podcast!

Hi, Everyone! On this episode of the HorrorFam.com Podcast, I wanna talk about kind of a weird subgenre of horror that I really enjoy but I don’t see discussed very often. And that’s: Movies — HORROR movies — starring children that aren’t made FOR kids. [laughs].

And I guess the most well-known example of this, at this point, would be the Stranger Things “television” [Netflix] show in which, you know, the main cast is child actors. But it’s a horror show and the kids are going up against monsters! And I know there’s a lot more to it than that but I’m simplifying things.

The Monster Squad would be another one. Super 8. Pan’s Labyrinth. IT: Chapter One. Silver Bullet! That one was a special one for me growing up because I was in a wheelchair as a child as well.

I was born without my right hip and then Children’s Hospital made me a new one. Bone graft. Being in a wheelchair was part of my recovery. And I didn’t really see too many other kids that had that in their background and it was really nice to have… To see that!

Like Phenomena? I guess that would count. I think Jennifer Connelly was 15 in that, which is a CHILD.

Actually, that reminds me! A lot of these movies seem to turn up on The Last Drive-In with Joe Bob Briggs! [laughs] Which is coming back later this week. And I’m very excited! And I know a lot of the other HorrorFam.com Podcast listeners and watchers — if you’re watching this on YouTube — are fans of the show as well.

Oh! And as a quick aside: My husband “FrankenSpear” and I — on the “LoveHorrorFam” handle on Twitter and Instagram — we tune-in to every episode of The Last Drive-In with Joe Bob Briggs and at least one of us tries to tweet along. Uh… It’s me. I’m the one who tweets along with the show. [laughs] Frank gets so involved actually watching the show that he forgets there are people watching with him. ♥ But, we’re both going to be watching so if you tune-in later this week… NEXT week!! On the 29th!! Say “hi.”

Invaders from Mars — the “new” one the original — those are both horror movies that aren’t made for kids but star a child as the main character. The hero.

Return to Oz as well. I love that movie! I used to pretend to be a Wheeler as a kid. [chuckles] Christi, one of our other writers, was just like “Those freaked me out! Are you crazy??” But… I… I dunno. Whatever. [laughs].

Dial Code Santa Claus. The Ice Cream Man. Those are both ones that showed up on The Last Drive-In.

And Rare Exports that’s another Christmas one that’s not for kids but has a child as the lead and kind of the hero of the story.

Let’s see… The Sixth Sense? That’s kind of in that subgenre as well. And I guess… Let’s see…

Recently? Psycho Goreman on Shudder! I think that one’s a Shudder exclusive now? Or always was…? Anyway! That one is also in that kind of weird subgenre of horror where it’s children as the lead characters but it’s NOT for kids.

I’m admittedly not the best at being an adult. I’m sort of…”childish,” I guess? So, I relate to these movies and I find them very comforting.

And, uh, I was born into the horror industry — as some of you know from previous articles and episodes — and I grew up with horror from birth until now (I’m almost forty) and, you know, you see a lot of teens in horror movies but you don’t see a whole lot of kids. So, for me, it was nice to see children like I was facing those monsters.

Because, like, adults… Adults can do anything! Y’know? But when you’re a child — or if you’re childlike — it can feel really daunting sometimes to have to face monsters, literally and figuratively. [nervous chuckle].

Whereas in the superhero genre they introduced kid sidekicks because they thought “Oh, well, a billionaire playboy? That’s not going to be relatable to kids so we’ll put a child sidekick in there so that they have, like, an ‘in’ to kinda…” You know? Have an avatar for themselves to “get” what was going on! And [laughs] kids were kinda, well… “I AM the night!!” Y’know? Like, “Why do I need Robin? That’s unnecessary.”

But I think, for me, that’s true as well. Like… Teen Titans is good. [laughs]. But, for the most part, kid sidekicks and kid superheroes that’s not really, uh, not that great.

For me, I think that’s because, with movies like these that I’ve been listing off you realize that not everyone can be a superhero but anyone can face monsters. And be brave. Be a hero. And I think that’s a pretty cool thing.

[chuckles] That’s… That’s Tina in the background, if you’re watching this on video. One of our cats is making a guest appearance.

Anyway, I was just wondering if anyone else loves this subgenre of horror as much as I do. And, if you do, please feel free to list your favorites in the comments or tweet at me @LoveHorrorFam — or at the same handle on Instagram.

And… yeah! I think it’s pretty cool and I don’t hear about this subgenre of horror being discussed often, if at all, and so if you have favorites in this subgenre let me know. For me, they really cheer me up! Especially during hard times because it’s like…

Some days it’s just like… You just don’t know HOW you’re gonna… [sighs] How you’re gonna get through the day, y’know? And then it’s like, “Well, if that little kid can face off a werewolf, I can get through today!” [chuckles].

So, anyway, that’s what I wanted to talk about today. Let me know what you think! Bye for now!!

OH!! And if you enjoyed this, or any of the articles that we have on

If you enjoyed this, or any of the articles that we’ve done on HorrorFam.com, you can support us at Patreon.com/HorrorFam! Or, um, share this! That would be nice. Yeah! Please like, subscribe, share… All that stuff!

You made it all the way to the bottom of this post?? Wow!

Here’s a video of how I got ready immediately before filming this episode:

Our cat Flex made an appearance in this video! She was mad that I had the door closed and was scratching and yowling to get in (you may have heard her a little in the actual episode too… *cringe*). If you watch closely you can see me saying “Flex! Flex stahp!!” and then opening the door… at which point I tried to show her what I was up to (she was uninterested). In pure cat-like fashion, she left as soon as she got what she wanted (the door open) and I said “Okay? Bye.” She made SUCH a huge fuss and then didn’t even want to be in the room after all! Cats are silly. Haha.

Flex’s mom, Tina, made an on-camera appearance during the actual HorrorFam.com Podcast episode so, if you’ve watched both videos, you got to see both of our cats in action! ♥

If you want more information about any of the makeup I used or anything, I talked about it on my personal site.

Thanks again for watching/listening to the HorrorFam.com Podcast, Fam!