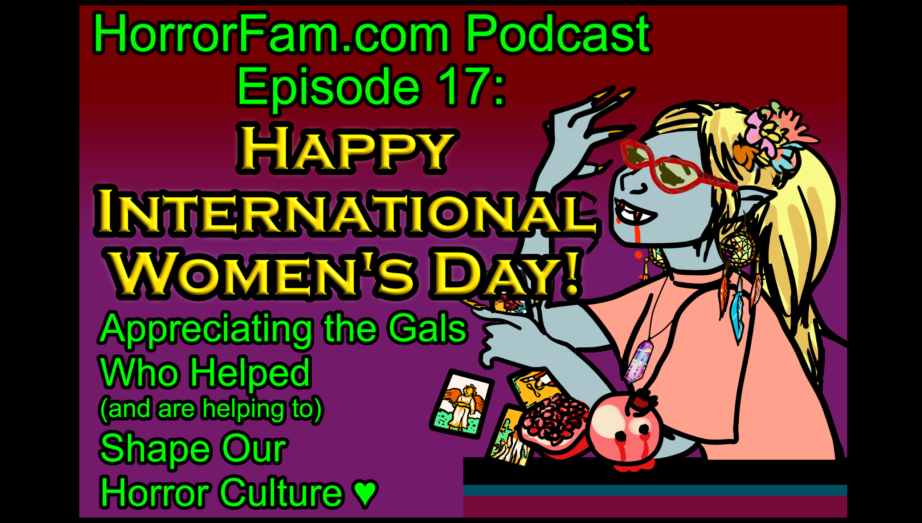 NOTE: My audio stopped synching up about halfway through the video. I’m so sorry. I’m still learning how to do videos. I tried to make the (very obvious) delay more interesting by adding lil glitchy effects and stuff… I’ll do better on the next one.

Hi! My name is Lauren Spear. This is Episode 17 of the HorrorFam.com Podcast. Welcome! [giggles]

Today, I’m going to be sending out love and appreciation into the universe to the women who help make horror – like the horror genre and our horror community – just so awesome.

So, March 8th is International Women’s Day and, if you’re a longtime HorrorFam.com reader or listener then you already know how much I love holidays. Though I must admit I’m rather new to celebrating this particular holiday…

International Women’s Day has been around since basically forever, but I never paid much attention to it. Basically, I could never really get a clear answer as to exactly what it was. So…

Forgive me if I’m wrong, but my current understanding is that International Women’s Day celebrates the political, economic, societal, and cultural achievements of women. And it was that last part that caught my attention: How women have influenced culture.

And, if you’re already a part of our horror-loving community then you know you belong to a rich societal subculture. So today I’m going to talk about and show appreciation for a few of the many, many, MANY women who have contributed to the horror genre and helped form our horror family’s culture.

First up: Horror just wouldn’t be horror without women!

Even if they aren’t necessarily the “hero” of the story, most horror protagonists are women. I mean, think about it! “The Final Girl?” That wouldn’t be a thing if that weren’t the case! [laughs] Yeah! Y’know? Horror is chock fulla women!

And I know we all have our personal favorite on-screen horror queens. And I hope that everyone’s sending love and appreciation to, you know, Barbara and Kelli and Felissa and all the other horror ladies who do so much for us on-screen and online.

Um… Got her on my shirt!

For those of you who are just listening to the audio of this and can’t see the video, I just stood up to show that I was wearing a Diana Prince t-shirt. [laughs]

Anyway! Diana Prince not only portrays “Darcy the Mail Girl” on The Last Drive-In with Joe Bob Briggs but she’s also a talented writer with articles on her own website as well as a column for Fangoria. And, she’s been entrusted with preserving and restoring over 20,000 hours of footage from the old MonsterVision and Drive-In Theater shows that Joe Bob used to do.

And so she’s not only entertaining us in the present, but she’s also helping to preserve our past as horror-lovin’ Mutants — and that’s pretty darn neat!

Speaking of the past, Mary Shelley is widely known as the “Mother of Science Fiction” but her most famous novel – Frankenstein – is also a very solid piece of gothic horror…

And Frankenstein’s monster went on to become a Universal Monster in 1931.*

And speaking of the Universal Monsters… Did you know that the Creature in The Creature from the Black Lagoon was created by a woman?

Milicent Patrick is credited as being the first woman to work in a special FX department! And she had a hand in designing the Metaluna Mutant and the Mole People, but she’s most well-known for designing the Gill Man for The Creature from the Black Lagoon.

And she also designed the Chernabog for the “Night on Bald Mountain” sequence in Fantasia and some of the various nightmare fuel that’s in the movie Dumbo. So, even if you’re new to horror, you may already be familiar with Milicent Patrick’s work and her horror-inclined designs through Disney (when she worked there).

But, yeah. Going back to the Universal Monsters for a minute…

If you were a monster… You know. A “Monster Kid” in my parents’ generation, you were alive for basically the “birth” of latex Halloween masks.

I’m talking about rubber masks that were suddenly accessible to anyone, not just performers.

And Don Post Studios played a huge role in helping to bring horror from the theater into our homes via rubber Halloween masks. So, rather than just watching the Universal Monsters, you could suddenly BE a Universal Monster!

And some of the most popular, well-loved, Don Post masks were the Calendar masks which were based on those monsters. And 9 out of 12 those masks were sculpted by a woman named Pat Newman.

One mask I can pretty much guarantee you DO know is the skull mask from Halloween III. That was also sculpted by Pat Newman.

And… There’s actually a LOT of women who worked at Don Post Studios over the years! Like in the Hair department and just… [overwhelmed sigh] There’s just SO many! I can’t… It would take the rest of my life to name them all! [laughs].

But, uh, one that I CAN name is my mom: Cathy Tharp!

You may already know that my dad worked for Don Post Studios for 40 years and did some horror movie FX on the side and my mom has basically the same story. And they worked on pretty much all the same films and television shows with very few differences… Like, my dad worked the 1988 remake of The Blob and Mom didn’t, but then she worked on Little Monsters and he didn’t so… you know.

But the rest of it, like Beetlejuice and the other things that they worked on, is the same.

And Mom’s just one of the many women who worked behind the scenes on some of your horror favorites. Horror masks, movies, television… There’s TONS of women helping to make it happen — then and now!

And the horror community is also really lucky to have so many women online showing support for the genre and its fans!

And… I’m still trying to get back into the swing of things after being gone for a while due to health issues but, in addition to the famous folks I mentioned earlier — Barbara Crampton, Kelli Maroney, Diana Prince (who are all just aces at social media!) — there are plenty of passionate smaller horror creators who actively engage with the community as well.

Christal the Super Ghoul is a writer and photographer and she took that picture of Michael Myers and Jason Voorhees having a milkshake together that everyone was stealing for a while. She’s the one who took that photo!

And Lily of Lily’s Laboratory is always online and doing something horror-related. Very active talking to people and giving other creators a boost.

And Kaci the Homicidal Homemaker makes really nifty horror-themed food! And Chelsey the “Stitchkeeper” from Tales from the Stitch creates AMAZING crochet dolls of horror characters.

And there are just so many other women as well. And… [sheepish laugh] I’m still in the process of seeing who’s still active and who’s not so forgive me for that but… um… You know what? We can find out together!

For International Women’s Day, poke around and try to find a gal who you feel is contributing to the horror subculture and give her a boost!

And, of course, HorrorFam.com was founded by 75% women as well! So, if you’ve liked any of our content, there’s a real good chance you liked something made by a woman! [laughs]

Happy International Women’s Day! Thank you for listening and/or watching the HorrorFam.com Podcast!

Don’t worry, Fam! I’m aware the 1931 version of Frankenstein wasn’t the first time the story was put to film. I was just trying to give Mary Shelley a shoutout on International Women’s Day and transition into talking about Universal Monsters ♥

Anyway, since you made it all the way to the bottom (and/or followed the asterisk for bonus content), here’s a fridge magnet I sculpted as a teenager of the 1910 version of Frankenstein’s monster — minus his hair: