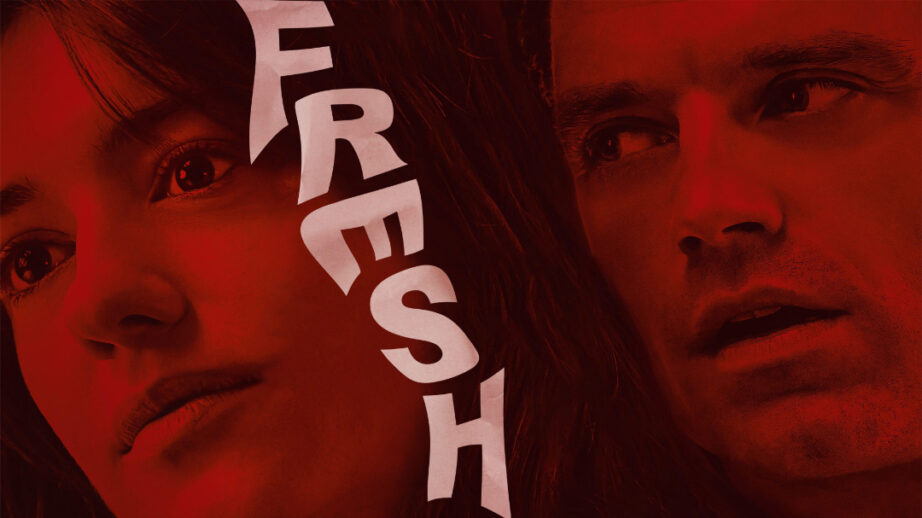 Hulu has offered horror fans a spate of original, made-for-the-platform films over the years including its Into the Dark series. While some movies I have really enjoyed (Tentacles, New Year, New You, Little Monsters, Pooka, Pure) and some I haven’t (False Positive, My Valentine, Wounds, Nasty Piece of Work) it’s still exciting to see original content geared towards eager horror fans.

When I heard about Sebastian Stan appearing in a new Hulu movie, I was excited. I love Stan in the MCU films but, honestly, I haven’t seen him in much else (save for his eerily accurate portrayal of drummer Tommy Lee in the limited series Pam & Tommy) so I was very intrigued to see him in a horror film.

I went into this movie completely blind and loved it, so if you don’t want to read minor spoilers, stop here (very minor – no plot details, I promise!).

Fresh is unlike anything I’ve seen, and I’ve seen plenty of body horror movies over the years (and enjoy this subgenre quite a bit). One of the most interesting things about this film is the opening. A fellow horror lover and close friend had already told me she thought the opening of the film was brilliant, but I couldn’t imagine what she was talking about.

From the get-go, Fresh positions itself as an innocuous tale about a young woman named Noa (Daisy Edgar-Jones) who is living the real-life horror of online dating. We see Noa’s frustration dealing with men who aren’t her type, so imagine her surprise when she meets Steve (Stan) offline.

The half-hour delay of the opening titles reminds me of the beat drop of a song when you aren’t expecting the tune to completely change (see Frank Ocean’s “Nights”) but when it does, you’re completely enchanted and willing to go along with the new turn of events. If you aren’t invested before the titles drop, then this is the moment you really see what this film is about, and if you’re like me and know zero about the plot, you’re in for a yummy treat.

Steve isn’t like other guys Noa has met through dating apps, and her dream romance soon turns to a hellish and scary fight for survival. Noa is a great female character – she’s plucky, resourceful as hell, likeable, and tough as nails. I’m happy to follow Noa into battle when she ends up in the most terrifying and weird situation any woman could possibly fathom.

Fresh is full of surprising moments and character reveals that keep you on the edge of your seat and interested through the unraveling of the almost two-hour storyline. You won’t be clockwatching though because there’s too much going on.

Stan and Jones lob dialogue back and forth like the most compatible tennis players serving balls, and their chemistry is a large part of what makes Fresh so enjoyable. I love a movie that can make me audibly gasp and react while I’m watching!

If you’re looking for some light fare (consider it a horror appetizer – not too heavy or filling!) to feast on, Fresh serves up hot, hilarious horror that’s totally addictive and delicious.

A word of caution: you may not want to eat while watching this film! (I say this from experience).