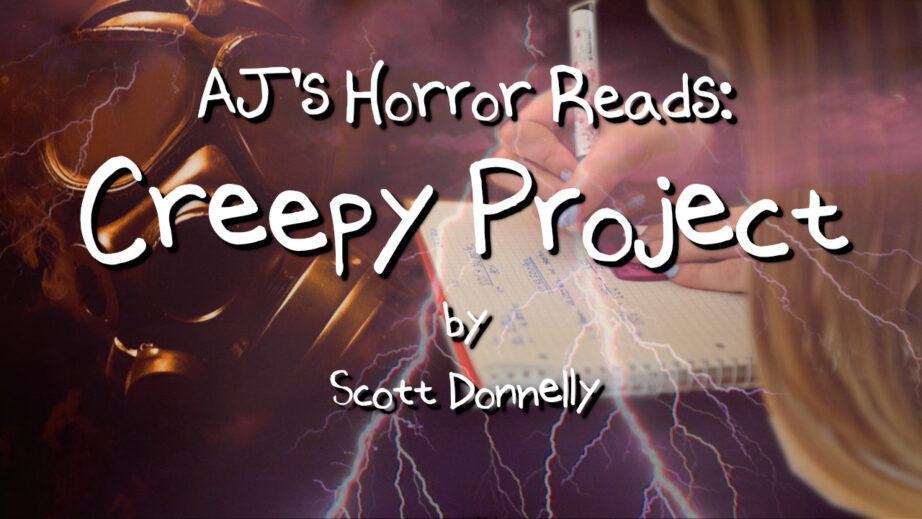 Creepy Project is the latest entry from Scott Donnelly in his Slash Em Up horror novel series, which also includes his books Cheater, Cheater (which currently has a film adaptation in development) and Killer Scarecrow.

I’ve now read all three Slash Em Up books and this fun horror series doesn’t have to be read in a certain order. Each novel is its own unique and thrilling homage to late 80’s/Early 90’s slasher films. Which, if you’re a huge sucker for that subgenre like me, will quench your thirst until the next Scream movie comes out.

Scott Donnelly’s Creepy Project focuses on is a group of five high school students, invited by sixteen-year-old Maeve Crawford to her very nice suburban house to work on an assignment for school. The subject is to make up their very own creepypasta.

If you’re not sure what that term means, allow me to explain… A creepypasta is a paranormal or scary story generated by internet users and spread throughout various online media platforms — most popularly on YouTube and Reddit. Chances are you’ve seen or heard of famous characters like Slenderman generated from these tales.

Maeve comes up with the perfect story: A serial killer named Mr. Dolor who wears a gas mask and is armed with a knife and poisonous gas canisters runs around committing murders and causing disorder. Maeve’s best friend Daisy, and the others all agree that’s the story they want to go with.

Everything seems to be going well until a dead body turns up, and Maeve realizes that someone is bringing her fictional character to life. The body count starts racking up quickly and the characters must find out who the killer is before they become the next victims.

Creepy Project Will Have You Guessing Until the End

Scott Donnelly was very clever when creating his cast. Maeve has all the makings of the final girl. She has a traumatic past and now lives with her mother who quickly remarried her new stepdad Wayne, a charming but oddly overbearing Ryan Reynolds’s lookalike who Maeve is not excited about bonding with.

So, Maeve is excited to find that Wayne is leaving her and her classmates alone for the night to work on their assignment. The only person on her team who she’s really close with is Daisy. The others — Ezra, Willa, and Knox — are still a mystery to her. This makes the whodunit all the more fun. Every character is multilayered and has more personality than the standard slasher stereotypes.

The homicidal maniac shows up during a thunderstorm, which really sets the atmosphere for when the first body turns up. Many early reviewers have compared this book’s style to that of Scream and Halloween. I also picked up on shades of underrated horror classics like My Bloody Valentine and The Prowler.

The brutal slayings and the twist at the end will stick with you long after you’ve finished reading, but even when it gets dark it doesn’t stop being fun. In fact, I’d dare say that Creepy Project has the readability of great teen terror stories like R.L. Stine’s Fear Street series or the novels of Christopher Pike!

Creepy Project by Scott Donnelly avoids cliches and never crosses the line of excess to the point that it becomes unintentionally laughable.

While some may consider these types of novels “lowbrow” due to the fact they’re unapologetically violent, stories like Creepy Project are sure to subvert your expectations. After all, have good old fashion slashers ever gone out of style? I think not. For proof, look at current best-sellers like Adam Cesare’s Clown in a Cornfield or There’s Someone Inside Your House by Stephanie Perkins.

Nostalgia, is in fact, a hell of a drug. That’s why I’m glad there are still writers and filmmakers cranking these types of stories out.  If you want something that is fresh, while still being both campy and genuinely scary, look no further. Check out Creepy Project by Scott Donnelly and, if you dare, wait to read its quick-turning 88 pages during a rain storm. Just make sure you’ve double checked that you locked your doors and closed your curtains first!