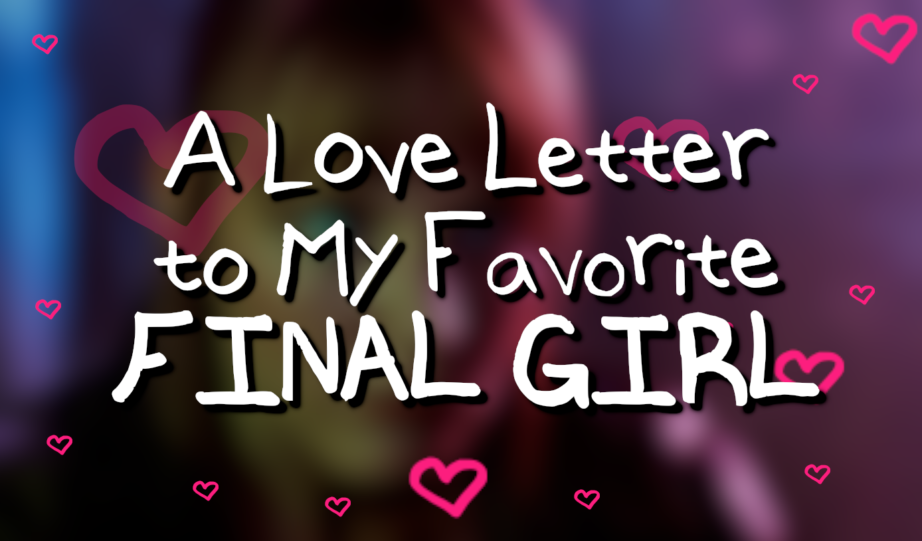 As for me, my favorite final girl is a bit of a deeper dive.

It’s no secret that A Nightmare on Elm Street was my first horror movie, making a lifelong impression and beginning a long and storied relationship with horror. As a teen making my way through the series, heroines like Kristen and Nancy moved and inspired me with their bravery and cleverness. But it was Part 4, Dream Master, when I met the character who resonated with me the most: Alice Johnson.

Played by Lisa Wilcox, Alice is an introverted, quiet, and socially awkward teenage girl forced into the mother/wife role much too early by her alcoholic father. Her brother, Rick (Andras Jones), is more gregarious than the meek Alice, but both teens have a group of friends who adore them. Alice doesn’t have a boyfriend but does nurse a crush on the ridiculously good-looking Dan (Danny Hassel).

When her friends start dying and Freddy gets closer to her, Alice begins to take on the special powers and qualities embodied by her friends as they perish. This begins Alice’s transformation from weak, quiet girl to bold, bad-ass babe. Her confidence grows as her belief in herself expands, turning her into a formidable foe for Freddy.

There’s a montage in the movie where Alice sharpens her skills and starts playing with her power – learning the nunchuks her brother had perfected. She straps on the bug zapper her brainy pal Sheila created and hones Kristen’s power to pull others into her dreams to help her wage war against Krueger. She straps on her leather bracelets and gets battle-ready, armed with Debbie’s physical strength and confidence, suddenly feeling herself blossom and flourish after feeling subdued and helpless for so long in her life, her eyes blazing.

She’s adding small bits to her wardrobe that represent her friends, literally and metaphorically getting up for the fight ahead, arming herself with protection and power in every sense. It’s a wonderful montage that gets you fired up for the final showdown – suddenly, Alice sees herself as she never could but has always been: brave and uncompromising.

The change is cathartic, and Alice embraces her new role as the one who steps up to vanquish Freddy – the only one with the power to defeat him in the end. Alice has an exchange with her brother Rick early in the film that sets up how Alice feels about herself.

Rick, glancing at Alice’s dresser mirror, which is covered in snapshots of her friends, mentions that Alice can’t see herself in the mirror, making a joke about the photos defeating the purpose of it. Alice remarks sharply, “I don’t want to.” However, as the movie comes to a climax and Alice aligns with her powers, she increasingly exudes the self-assurance and confidence she’d been missing all along. Alice also takes a good, hard look at herself in the glass before the ending battle, which shows us she’s finally overcome her timidness and can look herself in the eye without flinching. She has truly grown, and it shows.

This newfound confidence isn’t due to a makeover, a haircut, or anything superficial – it’s Alice embracing her own raw power, connecting to herself in a way she hadn’t before, and accessing her own abilities, elevated by her friends’ powers. It’s harnessing female strength in such a powerful and visceral way that she surprises even herself with what she can do.

This metaphor works also because Alice sets herself aside constantly and lives vicariously through her more extroverted buddies, so seeing her sort of “absorb” their powers after they die makes sense and serves to empower Alice to do what she needs to in order to gain control over Freddy.

You can minimize Dream Master and write it off as another 80s slasher, but if you look closer, you’ll see it’s a young woman’s journey to self-acceptance as well as a coming-of-age movie with lots of deep parallels to self-discovery. Also, the scene in the movie theater is one of my favorite scenes of any horror film ever, and I still think it’s incredibly well-done and a joy to watch!

Yes, Nancy, Laurie, Sidney, Ripley – these women are all so important and so defining for women in horror, for women in general. But I will always hold a special place in my heart for Alice, who showed me that quiet girls can be bad ass babes, too. And if you’re reading this, Lisa Wilcox, thank you for perfectly embodying the character who means so much to me.