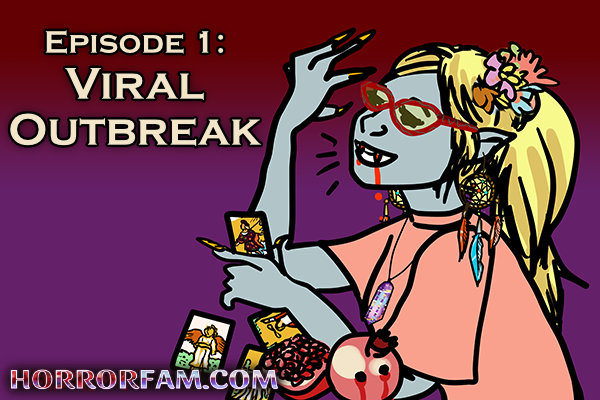 My name is Lauren Spear and I’m the founder of HorrorFam.com… Welcome to the first-ever episode of the HorrorFam.com Podcast!

Unfortunately, I have a cold right now, so my voice isn’t top-notch. I kept waiting for it to go away but it just keeps lingering on and on and… I guess this is my life now? [laughs]

Anyway, I apologize for my voice. And, if any parts of this sound choppy or weird, it’s probably because I had to edit out some of my coughing or wheezing or snot sucking.

I’m sure you understand. It seems like everyone is sick with something around this time of the year.

I actually find the common cold pretty horrifying. Since it’s a virus, there’s no actual cure, y’know? With bacteria or a fungus or a parasite, you can go to a doctor and get antibiotics or an antifungal or some sorta “blah blah”-zole and you’ll be good to go. Well on your way to feeling normal again.

With a virus… You go to the doc and they just kinda shrug like “Well, you have a virus. I can’t help you. Survive it or don’t. Good luck!”

You can prevent viruses with vaccines. You can manage their symptoms. But they can’t be cured. You just have to stick it out and hope that it either disappears or goes dormant so you can get on with your life.

Anyway, coming down with a cold, or any sort of virus, is one of those real-life horrors that makes me… want to watch horror movies.

Actually, pretty much anything could be used as an excuse to watch horror movies, but stick with me. I’m going to use my viral-infected grossness as a jumping-off point for a theme here.

Or featuring viruses, I guess? That’s probably more accurate. Horror movies that have a virus in them in some form or another.

Basically, movies you can watch when you’re sick and feel somewhat better because the characters in the movie are, most likely, having an even worse time than you are. [laughs].

So, one of the movies that comes up a lot in regard to folks being super yucky disgustingly sick is Cabin Fever. My husband, Frank, loves that movie. He’ll be on future podcasts but, at the moment, he sounds even worse than I do. Same for my dad. Gonna drag him on this thing at some point when he’s not hacking up a lung. Dad’s got all kinds of crazy-cool stories from back in the day when he and Mom were doing practical special FX for horror flicks in the ‘80s and ‘90s…

Anyway. Got off on a tangent there. I’d blame it on my low-grade fever but, honestly, I tend to do that regardless. I ramble. My bad.

ANYWAY… again. Cabin Fever! Yeah. The kids in that movie end up disgustingly sick. No doubt. But, the thing is, most cases of necrotizing fasciitis are caused by a flesh-eating bacteria or fungus — not a virus.

My beef today is with viruses. So, while Cabin Fever is, uh, “fun” in its own way and does feature horrifically sick people, I’m not going to “count” it in my list today.

The 1995 medical disaster film, Outbreak, focused on a virus. The “matoba” virus or whatever. It was based on the real-life — really awful — Ebola virus. And that movie isn’t a horror film, per say. In fact, I didn’t even like that movie… But that one scene in the movie theater where the dude’s coughing without covering his mouth (gross and ruuuuuuuude!) and his cough juice sprays out into the audience and infects everyone… Holy crap. I haven’t seen that movie since I was around ten-years-old but I still think about that scene every time I see someone coughing out in public without covering their mouth. Yikes.

Anyway, enough about real-life stuff. What about a virus that gives you symptoms of vampirism?

Richard Matheson’s novel, I Am Legend, dealt with that topic. It came out in 1954 and was made into a movie, starring Vincent Price, ten years later: The Last Man on Earth. You might also know the story from the ‘70s remake, The Omega Man, or the 2007 Will Smith version: I Am Legend.

It was also one of the inspirations for George Romero’s Night of the Living Dead. But I’ll get into that in a minute.

The story focuses on a pandemic that essentially turns people into vampires. In the book and the original movie, it’s theorized that the illness is caused by a bacterial infection. However, in later films, it’s referred to as a virus. Also, since most pandemics are virus-related, I’m going to count these as virus-related horror movies.

The movie Daybreakers also played with the idea of vampirism as a disease. In that film, the vampire-like illness was a plague brought on by infected bats. [laughs]. I’m pretty sure that was a virus as well. If it came from bats, it was likely similar to the rabies virus.

Speaking of bats and rabies… Or, rather, rats and rabies: Dead Alive is an awesome virus-related horror movie.

If you haven’t seen it, Dead Alive — also known as Braindead — is a Peter Jackson horror-comedy from 1992 that features the unluckiest dude alive… and a TON of gore. [laughs]. It’s amazing. Very bloody.

Anyway, the main character’s mother gets bitten by a rabid rat-monkey and things just kinda spiral out of control from there. It’s a zombie gorefest. Though Lionel, our hero, insists that “They aren’t dead! They’re just kind of…rotting.” [laughs].

I love Dead Alive as a “sick time” movie. Laughter’s the best medicine, y’know? Though I guess a lot of the humor depends on your threshold for gore. Maybe skip this one if you’re feeling nauseous? The fake blood never gets to me, but there’s a scene involving pus and, uh, custard… I don’t want to spoil it, but it makes me pretty queasy even when I’m feeling 100%. I’d say it’s a must-watch for horror fans, but don’t eat while you’re watching it, just to be on the safe side.

Actually, most of the movies featuring viruses are zombie-related, now that I think about it.

I know that there are still some holdout “purist” zombie fans out there who claim that “true” zombies aren’t born from illnesses… But… seriously?

I always find it really weird that we talk about “infected” zombies as “modern” zombies. George Romero reinvented the “zombie” when he made Night of the Living Dead, right? That’s what launched us into a new era of zombies. We strayed away from the traditional Haitian zombie and went with this “new” concept the zombies were people who were sick with…something.

The thing is, Night of the Living Dead came out over fifty years ago. Over half a century ago! Does that still count as being “modern?” [laughs]. Even the Tom Savini remake from 1990 is 30 years old at this point!

Like, I’m quickly heading towards the big four-oh, and I’m all for nostalgia, but jeez.

So yeah. Zombie movies. Lots of virus action in those.

Zombie video games too, actually. The Resident Evil series — or the Biohazard series, if you’re in Japan — focuses on the T-virus. Great games for when you’re under the weather. Last year’s remake of Resident Evil 2 was amazing. Really looking forward to the Resident Evil 3 remake in a few months.

World War Z, based off Max Brooks’ novel of the same name, is a fun one. The virus aspect is heavily focused on.

Pontypool is a lot of fun as well. It’s a bit more unusual. The virus infects words in the English language. Which is just… horrifying. Words are how I earn a living so that would be a disaster for me personally. [laughs]. Though I guess all the gruesome deaths would be pretty terrible too. If that went down in real life, I’m sure I’d be more concerned about the people dying than my bank account. At least, I’d like to think so.

Maggie is a lovely film if you wanna feel sad as well as sick. Don’t get me wrong: I enjoyed it! But it’s a bit of a bummer. Definitely features a virus though! The zombies in this film are infected with the “Necroambulist virus.”

I kinda want to include [REC] in this list as well… The first film refers to the zombie outbreak as a viral infection. That was later retconned in [REC]2 when it turned out to be, uh…minor spoilers? A demonic parasite. Which is also pretty sick. Eh. You know what? Watch both of those regardless. They’re good.

And, of course, who can forget 28 Days Later? The “rage virus” is basically a Hulked-out version of the rabies virus. I love 28 Days Later. It’s a blast. You’ve probably already seen it; but, if you haven’t, check it out. Or give it a re-watch if you’re sick in bed right now.

The first 15 minutes of 28 Weeks Later are decent as well. [laughs].

And if you want another one… Maybe this will sound familiar?

Once again, laughter is truly the best medicine and this infected/zombie horror-comedy is bound to make you feel like “it’s party time” even when you’re at your worst.

Anyway… that’s all I’ve got for today.

If you’re struggling to get through Cold Season, I hope these movies ease your suffering a little bit. Drink plenty of fluids, get lots of rest, all that good stuff.

Thank you for listening! Let me know what you thought about this episode. Take care of yourself.